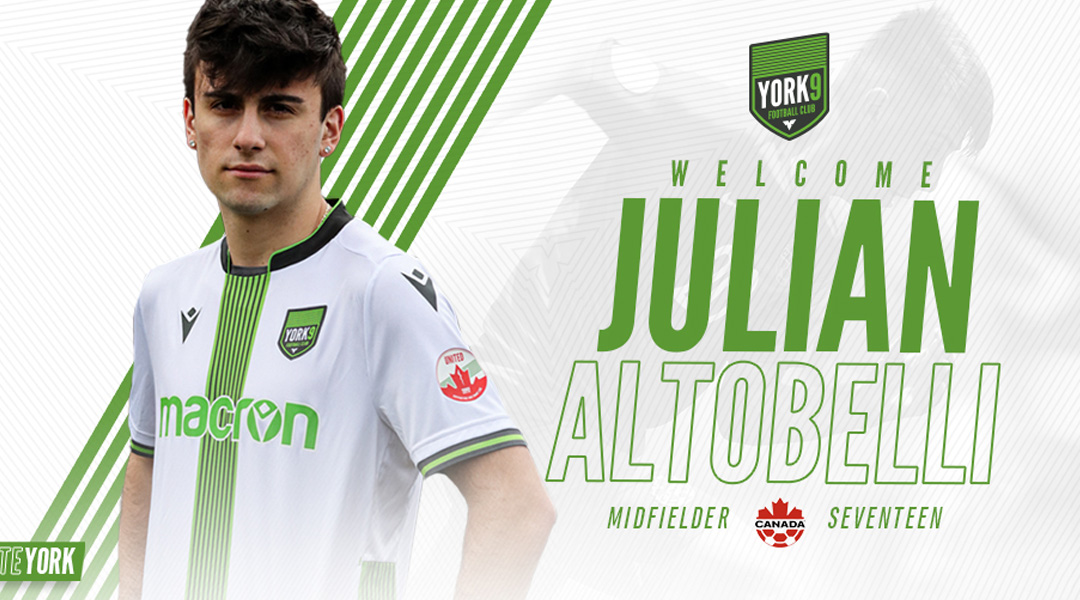 Canadian Premier League side York9 FC has signed its third domestic U-21 player ahead of the 2020 season, with the York Region club now announcing the signing of Canadian U-17 international Julian Altobelli. The 17-year-old becomes the youngest player currently enlisted with the Nine Stripes, and the third-youngest CPL player in the 2020 season so far.

Much like recent youth signing Ijah Halley, the Vaughan-born attacking midfielder comes by route of the TFC Academy at the U-19 level. Prior to that, he had also developed at local clubs in both Vaughan and Woodbridge.

More recently, he was also part of the Canada U-17 squad last fall during the FIFA U-17 World Cup in Brazil, making seven appearances for Les Rouges in all.


The signing of Altobelli completes the league requirement for York9 FC to feature three domestic U-21 players on the roster, with Altobelli joining local youngster Max Ferrari and fellow TFC Academy product Ijah Halley. The club’s latest signing will wear the number 22.

Given that he lives near York Lions Stadium, the 17-year-old was understandably excited to put pen-to-paper for a multi-year contract as he completes the last of his highschool courses online.

It is an amazing feeling to sign my first professional contract. The stadium is a few minutes from my house so starting my pro journey with my local club is something special. York9 and the Canadian Premier League just felt like the right fit for me.  I’m really looking forward to being part of the first team squad and having the opportunity to play and train with so many quality players every day.

The Nine Stripes have been in the midst of a busy week: the club just sold Emilio Estevez to Dutch Eredivisie side ADO Den Haag for a reported $100,000, making him the first CPL player to jump directly to a European top flight division.

The transfer left York9 FC with room to make two additional signings, with the Nine Stripes being very quick to bring in at least one.

We are really happy that Julian has chosen to sign his first professional contract with York9. I believe the progress shown by players like Abzi, Emilio and even Morey last year shows that we can help players develop after entering the professional game. Jimmy and the staff deserve so much credit for that.

All three players earmarked by McNab certainly took good steps in their first year as professional athletes: Abzi and Doner cemented themselves as league-leading fullbacks, while Emilio made his debut for Taiwan and is now set to test his mettle in Europe.


While what happens to Julian Altobelli in the future remains uncertain, McNab is confident that the youngster has come to the right place to develop.

Julian is clearly a young player with a great deal of talent – his selection for the National Team at last year’s U17 World Cup shows that – but what impressed me most was his desire to get better. He comes from a great family and I’ve loved chatting to him and his Dad about what he wants to achieve. We feel that we can support that, and he knows he’s got a lot of competition in our squad to drive him to be better.

With club options potentially keeping Altobelli with the Nine Stripes up until 2023, the club has put a significant gesture of faith in the Canada U-17 international.

With the league still on hold due to the COVID-19 pandemic, there’s no telling what Altobelli will ultimately get to make his debut for the Nine Stripes. The CPL is looking at several models for a modified season, one of which includes the idea of holding a modified season all within on province.

The financial terms of Altobelli’s contract were not disclosed by York9 FC.