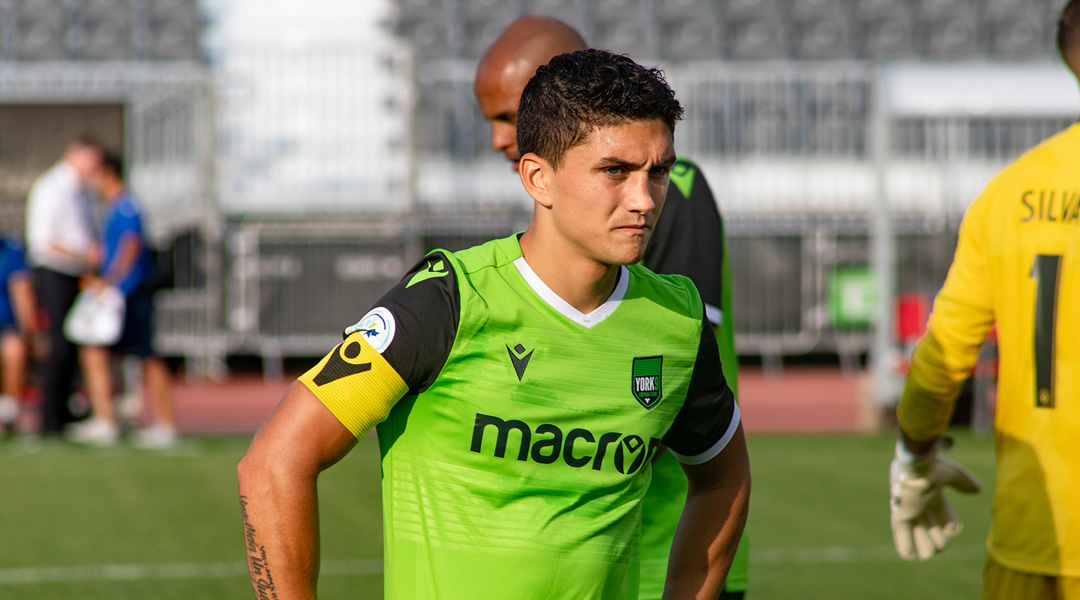 As has been largely speculated over the last week or so, York9 FC Captain Manny Aparicio has confirmed that he has left the Canadian Premier League side.

The Toronto-raised Nine Stripes Captain put out a heartfelt post on social media Thursday night, thanking the club that he has called home for the last two seasons and saying his official goodbye:

I never thought this day would come so soon. Unfortunately, it is time to say goodbye to the team that brought me in and helped me grow as a player and even more as a person. Saying goodbye is always difficult, especially when it’s a place you call home.

The diminutive midfielder put in an impressive showing at The Island Games, scoring two fantastic freekick goals across his six appearances this year. He departs the York Region side with 37 appearances, 4 goals, and 2 assists, with the fiery midfielder also having made some unintentional league history as the first player to receive a red card.

One of the more positive memories, of course, will be the time his absolute rocket against Pacific FC made the Sportsnet Top 10 and helped put the burgeoning league on the radar of a few more sports fans in the process.

After over 6,000 minutes spent wearing the captain’s armband on the pitch, Aparicio wanted to thank the roster of players that he combined with on the pitch across the first two Canadian Premier League seasons:

I have been fortunate enough to meet and work with some incredible people these last two seasons. Thank you to all my amazing teammates who worked hard and fought by my side on the pitch, but most of all, who became my family.

The former Toronto FC midfielder has recently been linked with Pacific FC, where the possibility of seeing Manny Aparicio link up with the likes of Marco Bustos and Alejandro Diaz is certainly a compelling prospect. The midfielder has confirmed that his next step is within the CPL, stating that more news should be coming soon.

While supporters’ group Generation IX has sometimes found itself at odds with Club President Angus McNab, the energetic group of dedicated supporters earned special mention from Aparicio in his farewell note, too:

I want to thank the fans, especially Generation IX, for always being there in the good times and even more in the bad times. As the captain, I couldn’t have asked for better supporters to help us mark the history of this club and a new era for Canadian football. I will be forever grateful for the unconditional love and support you’ve given us.

McNab had forewarned fans that the club wouldn’t agree on valuations for some of its out-of-contract players, which suggested that several of the nine now-free agents would come to terms elsewhere. McNab said he wouldn’t begrudge players pursuing opportunities to earn more money elsewhere, and Manny’s farewell suggests that there is no ill will between him and the front office:

Lastly, I want to thank the staff and ownership for the opportunity and trust in me to be the captain of this team. Being able to lead such an amazing organization with an incredible group of guys has been an hour. I hope and trust that one day our paths will cross again. Just know, a piece of my heart will forever be green.

While it appears York9 FC’s steadfast contract negotiations have caused players like Manny Aparicio, Joseph Di Chiara, and Luca Gasparotto to depart from the club, the Nine Stripes appear to have signed Chrisnovic N’sa to a sizable deal today: McNab made mention that a club would ‘do all [it] can to secure his services’ when a player like the U-21 Player Of The Year nominee becomes available.

While midfielders Chris Mannella and Kyle Porter seem set to depart and the futures of others like Ryan Telfer and Wataru Murofushi are unpredictable at best, the Club President did confirm that talks are ongoing with Roger Thompson and seemed to look positive.

One possible inbound replacement for Aparicio is Dylan Carreiro, with the former Valour FC captain starting talks with the club after moving back to Toronto for family reasons.

At the time of this article, the club had not published a statement regarding Aparicio’s departure.