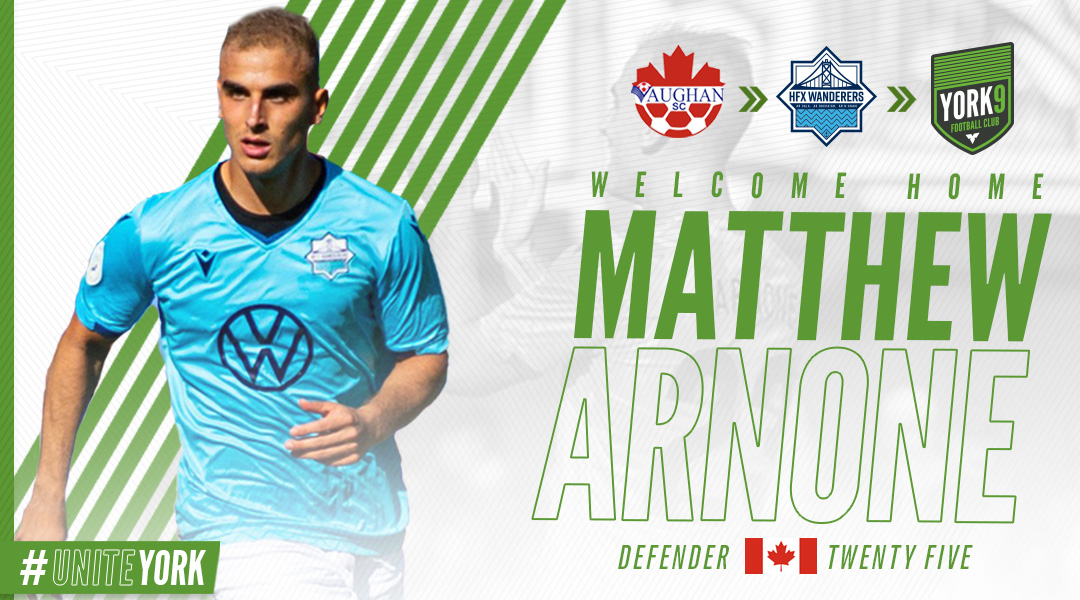 Last year, the 25-year-old centre-back was a regular starter for Stephen Hart at the Halifax Wanderers, making 28 appearances throughout all competitions and scoring two goals along the way. He was one of the sixteen players released by the club at the end of the inaugural CPL season.


There had been some speculation that Arnone would be a good fit at several CPL clubs – including expansion side Atletico Ottawa – but it’s the York Region team that ultimately drew in the Vaughan-born defender.

I am truly thankful for the opportunity to come and play in my hometown. To wear the crest and colours of York region is something I will do with pride. I am very excited to do something special with this group, with the talent on this squad the expectation is not just to compete, but win trophies, and I can’t wait to be a part of it.

Here’s what club gaffer Jim Brennan had to say about the Nine Stripes’ latest signing:

Arnone is a great fit for us. We’re bringing in another local boy with some experience in this league like Michael Petrasso, and in a position we wanted to reinforce. He’s got a good presence, and he’s played midfield before, so he’s good with the ball at his feet. It matches up with the way we want to play. Our centre-backs have to be able to play out the back and have a good touch. He’s just the right player for us.

Born and raised in Vaughan, the six-foot-two former York Lions player isn’t the only domestic professional to sign on for the Nine Stripes in a bid to play closer to home: former Valour FC midfielder Michael Petrasso was announced just weeks ago, following the footsteps of Toronto-born midfielder Chris Mannella.

Prior to his jump up to the professional level, Arnone was part of the Vaughan Azzurri side which won League1 Ontario honours in 2018 while also claiming the L1 Cup, too.

With York9 FC retaining the likes of Luca Gasparotto and Roger Thompson, the arrival of Matthew Arnone means that Jim Brennan and new assistant head coach Paul Stalteri have plenty of options at the centre for a back line which released Daniel Gogarty and hasn’t announced the future of Saint Kitts and Nevis international Justin Springer.

The contract length or financial details regarding Arnone’s contract were not disclosed by York9 FC.