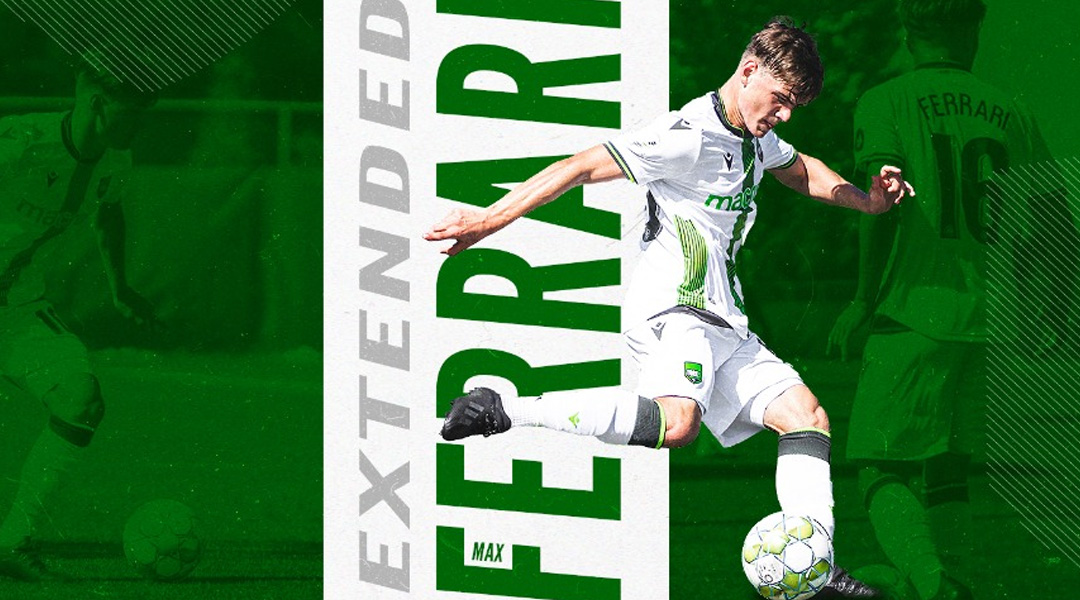 Canadian Premier League side York9 FC has been the busiest CPL club in terms of public roster moves, with the York Region side now confirming that youngster Max Ferrari will be staying with the club through to the end of 2022.

The former League1 Ontario teenager signed this February on a presumed one year contract, with York9 FC now signing him to a multi-year deal. With other youngsters like Lowell Wright, Julian Altobelli, Ijah Halley, and Isaiah Johnston all on multi-year contracts, it’s clear that the Nine Stripes have long term plans for the side’s teenage contingent.

As per the club, the terms of his contract also include an option for 2023 should the former Aurora FC midfielder progress well in the Nine Stripes ranks.

I was so happy to offer Max this new deal because he deserved it. I’m delighted he’s agreed to it. He came into 2020 determined to improve and the fact he appeared in every one of our seven Island Games fixtures was a true reward for all the work he has put in. Max realizes this contract doesn’t make him the finished article just yet and his continued willingness to work hard is a great example to our entire squad.

Now 20 years of age, the Newmarket-born midfielder made substitute appearances in all seven York9 FC matches from The Island Games, accumulating 158 minutes of action in all. His sole assist came in the club’s season opener, where a darting run saw Ferrari combine with then-16-year-old Lowell Wright to spark a comeback for the York Region club.

The performance from that match earned high praise from club gaffer Jim Brennan, who doubled down on the club’s faith in its teenage contingent.

While the club’s other youngsters (minus goalkeeper Ezequiel Carrasco) are all currently set to return for to the 2021 Canadian Premier League season, the same can’t be confirmed for many of its more senior outfield players: we know that Morey Doner, Diyaeddine Abzi, and Michael Petrasso have re-signed for 2021, but many of the club’s outfield players are on contracts of undisclosed length.

With some expected high profile intra-league roster moves in the midst, there has been some speculation that players like Joseph Di Chiara and Chris Mannella have received offers from elsewhere, though only time will how the Nine Stripes roster will shake up next season.

The club is bringing in German forward Julian Ulbricht for the 2021 season, which provides another target for Ferrari to link up with. It’ll be interesting to see how the Newmarket-born youngster develops under the likes of Jim Brennan and Paul Stalteri for the coming years. McNab also hopes to make more offseason loan moves, so it remains to be seen if Ferrari may have a short term opportunity to develop overseas come the January transfer window, too.

York9 FC did not disclose the financial details of Ferrari’s multi-year contract.