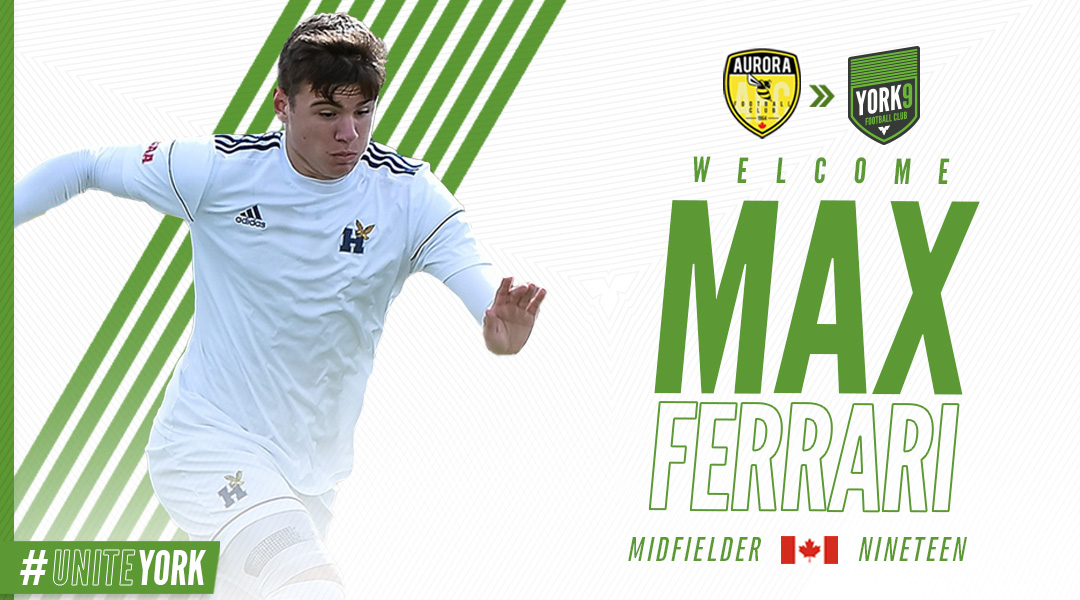 When the Nine Stripes revealed their 2020 home kit tonight, it wasn’t the only news to drop: the York Region club also announced the signing of 19-year-old box-to-box midfielder Max Ferrari, who signed his first-ever professional contract after an impressive season with League1 Ontario side Aurora FC.

Ferrari made 15 appearances for Aurora last season, clocking in nearly 1,200 minutes of competitive action as the League1 Ontario side came to a tenth-place finish. He’s known club gaffer Jim Brennan since he was seven, and stated he’d taken part in the local Domestic U-21 player talent ID camp that the club hosted following its international scouting combine in Mexico.

The Newmarket-born midfielder had also played for OCAA side Humber College last season, where he played eight games and contributed two goals.


Here’s what club gaffer Jim Brennan had to say about the club’s newest youngster:

I’ve known Max for a long time and it’s great to have him on board. He was sitting in the stands last year watching York9, and this year he’s going to be wearing our jersey this year. It’s great for the club, the region, and for Aurora to produce another talented young kid. He has a good understanding of the game and great potential: he’s got pace and wants to take players on. He has the right tools and we’ve just got to refine them and get him to understand the game a little bit more in a positional sense. It’s fantastic that he’s now broken into the pro environment, especially with York9, his local pro club. We’re excited for Max but for ourselves, too – having a local boy out of the York Region signing for the club is positive for everyone.

Aurora FC has plenty of close ties with York9 FC: it’s where club gaffer Jim Brennan spent time as a head coach between 2015 and 2017, and it’s also where full-back Morey Doner plied his trade before impressing at the CPL level. Aurora FC is also where recently-released Nine Stripes striker Simon Adjei had a prolific year in 2016, when he scored 19 goals in 19 appearances.


Shy, quiet, and unassuming, Ferrari had a quick introduction to Nine Stripes fans at the 2020 home kit reveal before walking off-stage. Later on in the night, Max described signing with York9 FC as a dream come true, stating that so far becoming a Nine Stripes player had been everything he imagined. In talks with Northern Tribune, he says fans can expect him to bring a lot of hard work, effort, and creativity onto the pitch.

Ferrari becomes the 19th player to be confirmed for the York Region side’s 2020 Canadian Premier League season. Jim Brennan and sports consultant Angus McNab recently announced the signing of Peruvian striker Adrian Ugarriza, who is expected to help lead the club’s goalscoring efforts as a replacement to the outbound Rodrigo Gattas.

Ferrari’s contract length or financial compensation was not disclosed by York9 FC.