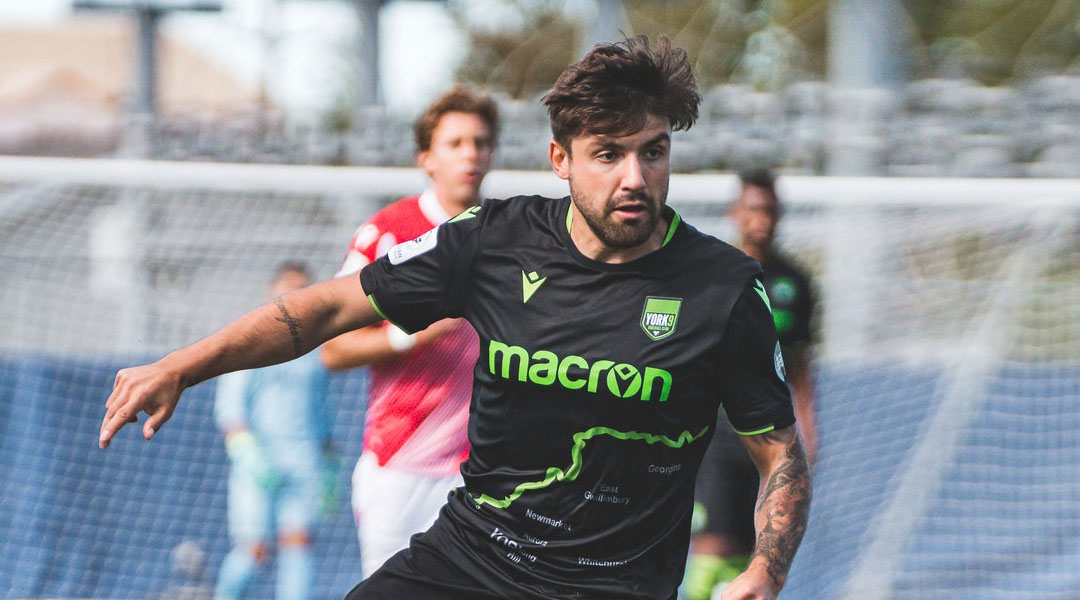 Canadian Premier League side York9 FC has re-signed Michael Petrasso on a multi-year deal that will see him remain with the club through 2022.

The 25-year-old Woodbridge native spent the inaugural CPL campaign as a star player for Valour FC, but transferred to York9 FC this January as a free agent. A groin strain injury sidelined Petrasso for much of The Island Games, with the midfielder only appearing three times for a total of 130 minutes in all.

York9 FC has shown some good faith in the health and fitness of Petrasso, who also missed much of the 2019 spring season before scoring five goals and three assists in fourteen matches back in his Valour days.

I’m delighted that Michael has decided that this is the club for him and that he wants to continue at York9 FC – he wants to be here. He was a pleasure to deal with as we sorted all of this and his priority is pretty simple: get back to being the best forward in this competition. Michael was hugely frustrated with his 2020 season and he’s just shown all of us he wants to get back to football and improve. What a great example for our young guys and, frankly, everyone in our squad.

In the beginning of his career, Petrasso developed at the Toronto FC Academy before jumping over to England, where he signed his first professional contract with Queens Park Rangers in 2013. Five years after he went overseas, Petrasso returned to Canada to sign for the Montreal Impact, for whom he made 14 appearances before signing joining the Canadian Premier League.

He’s also appeared for the Canadian national team nine times, the last of which was in 2018.

I’m thrilled to make this commitment to York9 FC. I’m extremely happy to be here and be a part of what we’re building. I want to play a major role in the growth of the club moving forward. That’s really important to me.

The Nine Stripes have signed a few players on multi-year deals, including the bulk of the club’s teenage contingent. Earlier this year, the York Region side also confirmed it had signed Morey Doner for the 2021 Canadian Premier League campaign as well.

With York Lions Stadium in the middle of significant renovations, Petrasso will find himself playing on a turf pitch during home matches for the next two years.

With a long offseason ahead, the club has already loaned out Jamaican forward Nicholas Hamilton to Dundee FC, with Club President Angus McNab utilizing the likes of TransferRoom (among, likely, other sources) to potentially arrange for more offseason moves for his current roster.

The financial details of Michael Petrasso’s contract were not disclosed by York9 FC.

How FC Edmonton Plans To Secure Offseason Moves For Its Players