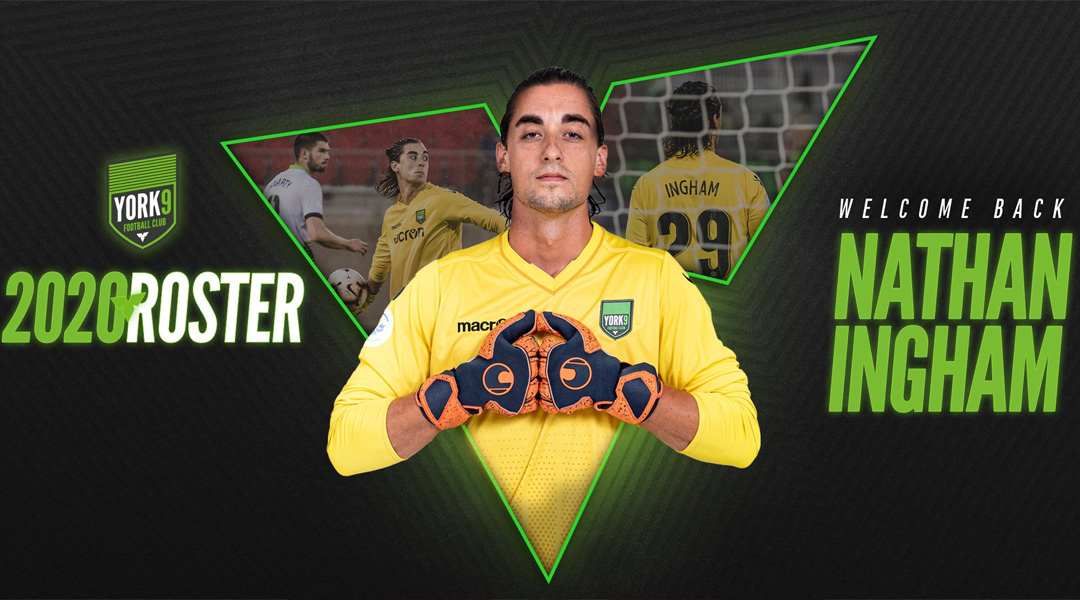 York9 FC has officially announced that first choice goalkeeper Nathan Ingham will be back for the 2020 Canadian Premier League season.

The 26-year-old from Newmarket was a consistent sight for the Nine Stripes, starting in all but two matches for the York Region club over the course of the inaugural season. He led the Canadian Premier League in saves with 89, recording six clean sheets and earning a nomination for the Golden Glove Award in the process.


Given that York9 FC head coach Jim Brennan said he was happy with the core squad as the club’s inaugural season came to a close, the re-signing of Nathan Ingham will come as more of a relief than a surprise to fans of the York Region side.

He was fantastic for us this season and we’re looking forward to working with him. When you build a club, you want a solid keeper which [we] have with Nate.

Ingham was a late addition to Brennan’s inaugural squad, being announced a day prior to the club’s Punta Cana-based preseason – though the domestic keeper didn’t take long to impress: he usurped the starting spot from Matthew Silva in time for the league’s first-ever match.

Silva, who featured in just one game in the inaugural CPL season, was one of the six released York9 FC players that were announced last week. It is unclear if former York Lion Colm Vance will be retained as an alternative goalkeeping option.


While York9 FC fullback Morey Doner announced that he has signed on for 2020, Ingham is the first player to be officially confirmed by the club itself. Fans can likely expect to see more core members of the squad being re-signed in the near future.

Even by Canadian Premier League standards, the Nine Stripes have featured a heavy focus on domestic talent: it only utilized three of its seven international roster spots throughout the course of the 2019 season. As the club fought its way to a third-place finish in the fall season, Nathan Ingham spoke out about how the MLS had been holding Canadian talent back for years.

With the future of the club’s three current internationals still unclear, York9 FC is scheduled to host an international scouting combine in Mexico later on this month to potentially bring in more talent from outside of Canada. However Jim Brennan reshapes his squad, he promises that 2020 will see a much-improved York9 FC take to the pitch.

It’s fair to say that retaining the services of Nathan Ingham certainly gives the club a strong foundation to build from in this regard, though fans will be eagerly awaiting to hear if the likes of Abzi, Di Chiara, and team captain Aparicio will be back next year, too.