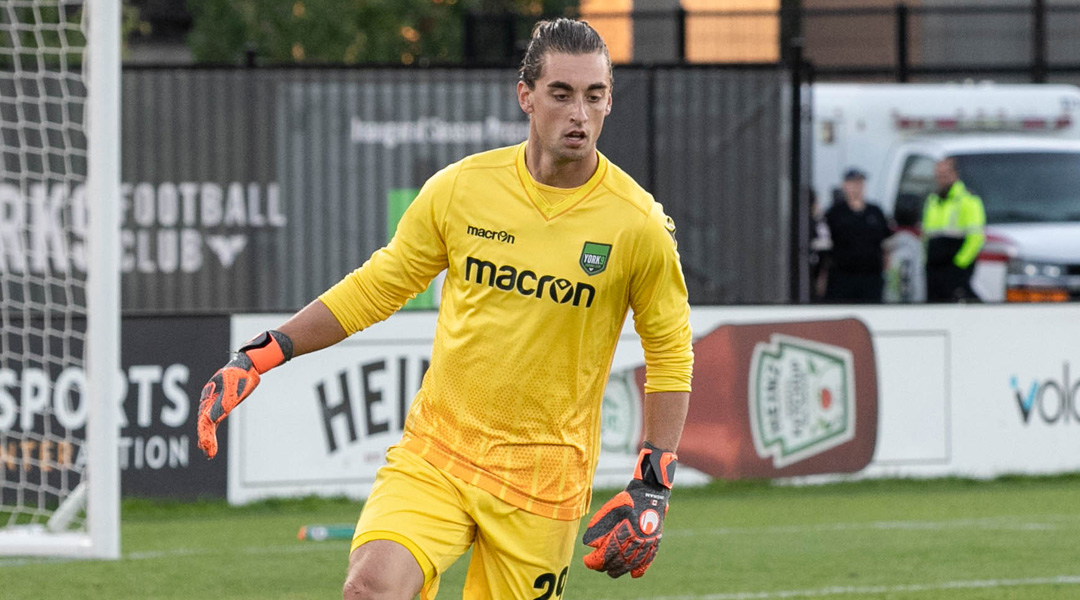 York9 FC goalkeeper Nathan Ingham may have led the league in saves (89) last year, but the Canadian Premier League golden glove finalist is hungry for more – a lot more.

Speaking with Northern Tribune at the York9 FC 2020 home kit launch party, the 26-year-old goalkeeper was quite candid with his self-assessment: there’s plenty of room for improvement, and he knows it.

There’s a lot of room for improvement. Obviously, I didn’t win goalkeeper of the year, and I didn’t lead the league in clean sheets. Those are two things to start right off the bat. More importantly is that we didn’t win enough games to get up there in the win column. I’m going to try and stay healthy like I did last year, and play all thirty-whatever games like I was able to last year. I had two games that I sat where I was available, and we decided to give me a rest because it was a busy stretch in the last games of the season. A lot of good things, but plenty of room to improve.

York9 FC found itself in the middle of the pack in terms of goals against, and while the club looked good when the players got comfortable under club gaffer Jim Brennan’s playing philosophy, the squad lacked the consistency it needed to stay in the race for the CPL Finals. Ingham had said from the outset that the club was always aiming for the championship game, but a third-placed finish meant that the club missed out on the league’s first-ever two-legged championship playoff.

This season, finishing in third place in the now eight-team league would mean qualifying for playoffs, though Ingham has his eyes solely on the coveted number one spot on the league table. Finishing there secures a spot in the CPL Final immediately, with the second and third-place teams undergoing a two-legged playoff in October to determine the other finalist.


With those championship aspirations in mind, York9 FC began its official preseason a few weeks ago, though many of the club’s local players actually began training together prior to that start date. With Paul Stalteri now with the club as an assistant coach after a staff roster shuffle, several Nine Stripes players have provided positive thoughts on his rigorous training sessions ahead of a multi-week preseason camp due to take place in Kissimmee, Florida.

Ingham says the squad atmosphere is good, noting that the core group of defenders who started in front of him last season are all returning, which brings in a sense of familiarity that he claims is comparable to what Cavalry FC and Forge FC had with the Calgary Foothills and Sigma FC last year. He also says the newfound roster depth at the back has put the club miles ahead of where it was last year, echoing the sentiment of club gaffer Jim Brennan’s speech earlier in the night.

The atmosphere is good right now. We’ve changed things a little bit, but Abzi, Morey, Roger, Luca, all of our first choice guys last year are back this year. Massive. Arnone is a big signing, Fugo on the left, good signing. Different guys that can fill in at right back. We’re miles ahead of where we were last year. Just knowing eachother, knowing how we play, especially the way we play, it’s going to go a long way. We’re finally at that stage where Calgary and Forge were last year because of Foothills and Sigma, and it’s a really good feeling.

While Tommy Wheeldon Jr. is loath of hearing the oft-discussed Foothills familiarity as a shorthand explanation for his team’s success, it’s one that is frequented by players and fans alike – so it’ll be interesting to see how the second-ever Canadian Premier League season pans out now that club rosters league-wide will have more familiarity, with the obvious exception being new expansion side Atletico Ottawa.


Of course, the importance of familiarity extends beyond the players themselves: while clubs like Pacific FC and the Halifax Wanderers have new goalkeeper coaches heading into the second season, York9 FC has stuck with Camilo Benzi to help continue the development of its two goalkeepers. As it turns out, Benzi’s contract renewal played a significant role in Ingham staying on with the Nine Stripes:

Before I re-signed with York9 FC last year, it was a big conversation with Camilo to make sure he would be here this year. He’s hands-down the best goalkeeper coach in the league. That’s why you saw our staff shuffle around, and he’s still here with us. He’s extremely good, and I can’t say enough good things about him. I’m learning a ton from him still. The thing I love the most about him is that he’s always going off and learning on his own as well. In the offseason, he’s over in Spain, he’s in Tottenham in England, he’s over in Germany with Wolfsburg learning from the best in the world, and he’s coming back and he’s bringing that. Really happy he’s back, it wasn’t by coincidence that we’re both back here together.

Camilo had previously helped train Ingham when he was a teenager, with the Nine Stripes goalkeeper also giving a shout out to Extreme Goalkeepers’ Riccardo Greco. Back then, a young Ingham had seriously considered jumping to Europe to further his career, but an Ontario-based coach name Tom Croft convinced him that pursuing a university education and playing NCAA football would give him better options if a playing career didn’t pan out.

Following a university career that saw him secure the number one spot with the Florida Gulf Coast Eagles (and finish as the team’s all-time goals-against average leader), Ingham turned down an MLS Combine invite to sign with then-NASL side FC Edmonton. Things looked to be taking off for him after he forced his way into a starting spot (with a short loan to Toronto FC 2 happening as well), but an injury saw Ingham lose out on the coveted number one position. The Newmarket-born goalkeeper then eventually signed for K-W United and, in 2018, he signed for the Calgary Foothills and the Pittsburgh Riverhounds shortly after.


Prior to the inaugural season of the Canadian Premier League, Ingham trialed with USL side Swope Park Rangers, but the club had concerns about his international status if the team’s MLS affiliate, Sporting Kansas City, needed to call him up. The lack of security for Canadian players in MLS is something Ingham has been very vocal about, but it was an event that eventually led him to become one of the Canadian Premier League’s most exciting goalkeepers and re-unite with Benzi.

Before York9 FC had kicked its first ball last season, the club had signed Matthew Silva as its expected number one, with former York Lions goalkeeper Colm Vance on the books as the backup. After Ingham spent some time trialing with Forge FC, he burst onto the scene with York9 FC as a last-minute roster addition a day before the club’s Punta Cana-based preseason camp, where he immediately cemented himself as the club’s starting goalkeeper.

One year on, Silva has now departed from the club after only making one appearance in the inaugural CPL campaign. Jim Brennan re-signed Colm Vance, who stated he appreciated the confidence the club showed in him during the offseason. Vance made his debut in the last home game of the year against the Halifax Wanderers, and he’s ready to be called upon again should the opportunity arise:

I know Nate and I think the same way – the best goalkeeper is going to get to play, and situations come up, injuries happen. I know last year for me at the beginning of the season, it was an injury that got me out to the sides. I’m working hard to challenge. Nate had a fantastic year last year, and coming in to that it’s good to see what good goalkeeping can do for a team. I know that if it does happen to me, getting called upon, I want to keep that good goalkeeping going. It’s a fun time, I’m excited to play and get called upon.

Ingham recognizes the realities of the game, saying there’s always going to be competition and areas to improve on. From his experience with FC Edmonton, he knows that ‘however the cards play, that’s what happens’.

Having recorded six clean sheets and made eighty-nine saves across twenty-six league games – not to mention six Voyageurs Cup appearances, two of which were against MLS opposition – Ingham has left himself a high standard if he’s to consider the 2020 season an improvement over the last season. He wants to usurp Marco Carducci for the league’s golden glove award, and help lead York9 FC to the North Star Shield.

While his contract status beyond 2020 still unknown, one can only guess as to where the 26-year-old will find himself in the years to come. Success at York9 FC might open other opportunities, and Ingham has made it no secret that he’d like to break into a Major League Soccer side in the later stages of his career. Before that can happen, however, he’ll need to stay consistent with York9 FC throughout its second-ever season to determine what kind of legacy the club’s number one shotstopper leaves behind.

For now, he’s focused on coming in and being the best goalkeeper in training every day, one step (or save, rather) at a time.