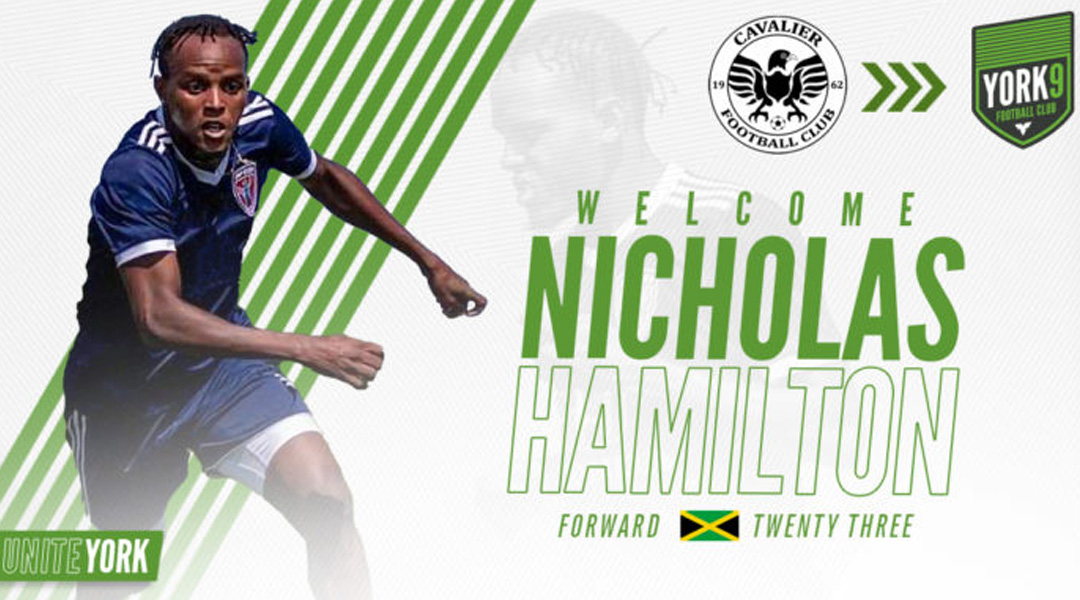 Over one month after we first reported that York9 FC had signed Jamaican striker Nicholas Hamilton, the Nine Stripes have made the 23-year-old’s signing official, pending a work permit approval.

The Kingston-born striker will arrive on a multi-year, club option deal after playing his trade in the Red Stripe Premier League for Cavalier SC, where he impressed alongside alongside new Halifax Wanderers signing Alex Marshall. At Cavalier, Hamilton established himself as a striker who was also comfortable out on the left wing, bringing versatility to a Nine Stripes roster that already includes wingers like Michael Petrasso, Kyle Porter, and Corinthians product Gabriel Vasconcelos.


Of course, Hamilton arrives as a striker first and foremost. Here’s what Nine Stripes gaffer Jim Brennan had to say about the club’s latest signing:

Nicholas is going to bring us a great deal of energy up top. He is a player who wants to take players on, in or around the box. [He is] great going forward and clinical in the final third area; he will give us some good pace to get in behind teams. Nicholas is a talented young player who has been called up by the national team [for a camp], which shows you the type of quality he has as an individual.

Hamilton is the club’s fourth international signing for the 2020 Canadian Premier League season. Midfielder Wataru Murofushi is the only international to remain with the club following its inaugural campaign, with the Nine Stripes also bringing in Gabriel Vasconcelos and Japanese left-back Fugo Segawa for the 2020 season.

With the likes of Rodrigo Gattas, Simon Adjei, Cyrus Rollocks, and Austin Ricci all parting ways (and the future of Michael Cox still uncertain), Hamilton is ultimately the club’s only striker on the books so far. That being said, former Toronto FC striker Molham Babouli has been training with the side, indicating that the club may be bringing in another goalscorer in the near future.

Hamilton becomes the club’s sixteenth of twenty-three allowed players. Even with two domestic U-21 players expected to be inbound from the CPL-U Sports Draft, it looks like club gaffer Jim Brennan still has ample room to work with as he fleshes out his roster alongside sports consultant Angus McNab and new assistant coach Paul Stalteri.

The financial compensation due to Nicholas Hamilton was not disclosed by York9 FC.