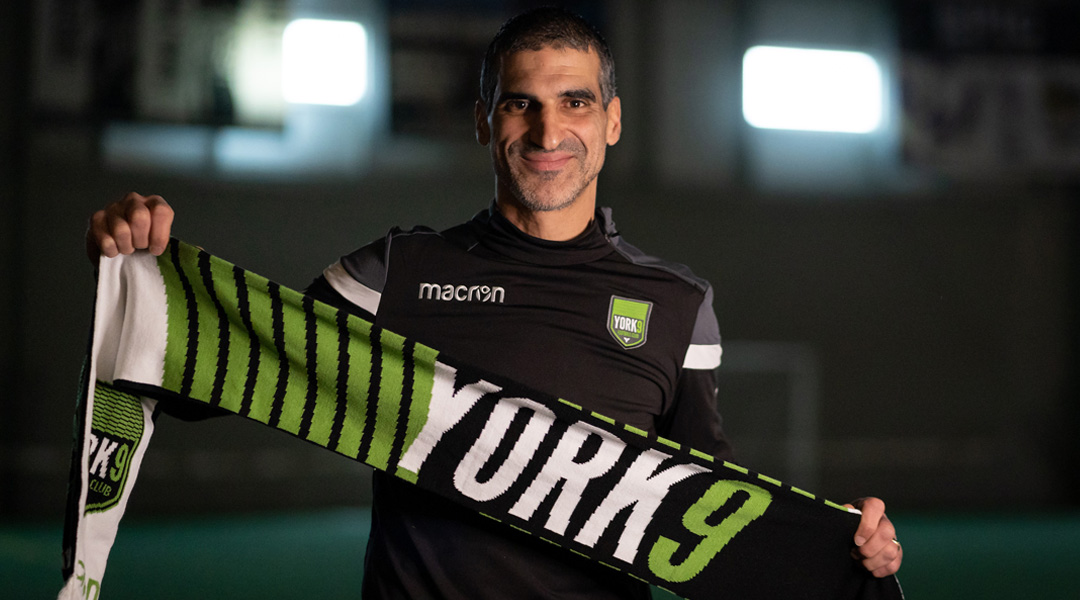 It was just before Christmas when we first reported that Paul Stalteri appeared to have joined the York9 FC coaching staff, and more than a month later the Nine Stripes have now made the appointment official: the 42-year-old former Tottenham defender has signed on as first assistant coach, replacing Carmine Isacco.

It is not immediately clear what ultimately led to the departure of Isacco, who was recently honoured at the York Region Soccer Association Hall of Fame. Interestingly, the Vaughan Soccer Club has also announced the arrival of both Luca Forno and Sergio DeLuca, both of whom were part of the York9 FC technical staff – though it’s unclear if the duo have also fully departed from the Nine Stripes.


In bringing in the experienced Canadian international who was twice named Canadian Player of the Year, the Nine Stripes are getting a former professional with ample top flight European experience. Having grown up with Nine Stripes gaffer Jim Brennan, Stalteri states the two have similar tactical philosophies and had been in discussions about the role for the last two months:

This is a great opportunity to build this club into something very special. We grew up playing together so I’ve known Jimmy for more than 25 years. We’ve kept in close contact throughout that time, and it was just after Christmas that we started to speak in more serious terms on what role I could play and bring to the team, and what he’d like [to achieve]. I live in the area so it makes a lot of sense on my side and from the club’s perspective. Knowing Jimmy for a long time also makes the decision to work together easier; we have a similar philosophy on how the game should be played and how we want this club to move forward.

Stalteri has already been in the mix of things with the Nine Stripes for some time, as he was on-hand to help the York9 FC technical staff during the club’s domestic U-21 talent camp held in December. Carmine Isacco was not in attendance at this camp.


With a career that saw him get his start with the Toronto Lynx and eventually play for Werder Bremen, Tottenham Hotspur, Fulham, and Borussia Monchengladbach, Stalteri retired in 2013 with 84 caps for the Canadian national team to his name. He’s kept busy after hanging up his boots, coaching various age groups in the national team set-up and keeping himself well-aligned with the professional game, which means the now-York Region local arrives to York9 FC with plenty of coaching experience already under his belt.

When I first got back from Europe, I was pretty much straight into the role with Canada Soccer, working with all the different levels there from U-15 upwards. It was an excellent grounding at the start of my coaching career, and I finished off working with the men’s team. I’m looking forward to getting into it [at a club level now], and the serious part of the preseason, which is coming up very shortly.

With several of the club’s local players already checking in to training camp, the new York9 FC assistant coach has already been quite busy ahead of the official preseason start date in March. Club gaffer Jim Brennan revealed that he wanted to work with Stalteri since the very beginning of the club, but Stalteri’s commitments with Canada Soccer precluded the duo from teaming up earlier.

I wanted to get Paul in from day one; he’s got a great deal of experience, but he was with the national team at the time so we’ve had to be patient. I am pleased that we’ve been able to get him on board now. He’s a professional who has played at the highest level and it’s a great opportunity for the players here to be able to utilize his vast knowledge.

Stalteri replacing Isacco far from the only coaching change-up the Canadian Premier League has seen so far: Pacific FC brought in Pa-Modou Kah as the club’s new head coach, while the Halifax Wanderers have seen plenty of technical staff shuffling with the departures of Derek King and Michael Hunter, along with the coaching addition of Jan-Michael Williams following his retirement as a player.


York9 FC also parted ways Preben Ganzhorn around Christmas-time, with the club’s official confirmation of such events coming almost as slowly as Stalteri’s own announcement. The club has called upon Angus McNab and his sports consultancy company to help fill in for Ganzhorn in the meantime.

With York9 FC rising to third in the fall season, the club’s biggest vice in its inaugural campaign was consistency. Whether Stalteri and playing additions like Michael Petrasso, Chris Mannella, or Gabriel Vasconcelos can instill a better winning record remains to be seen, but the side will certainly be an interesting one to watch for 2020 Canadian Premier League season.