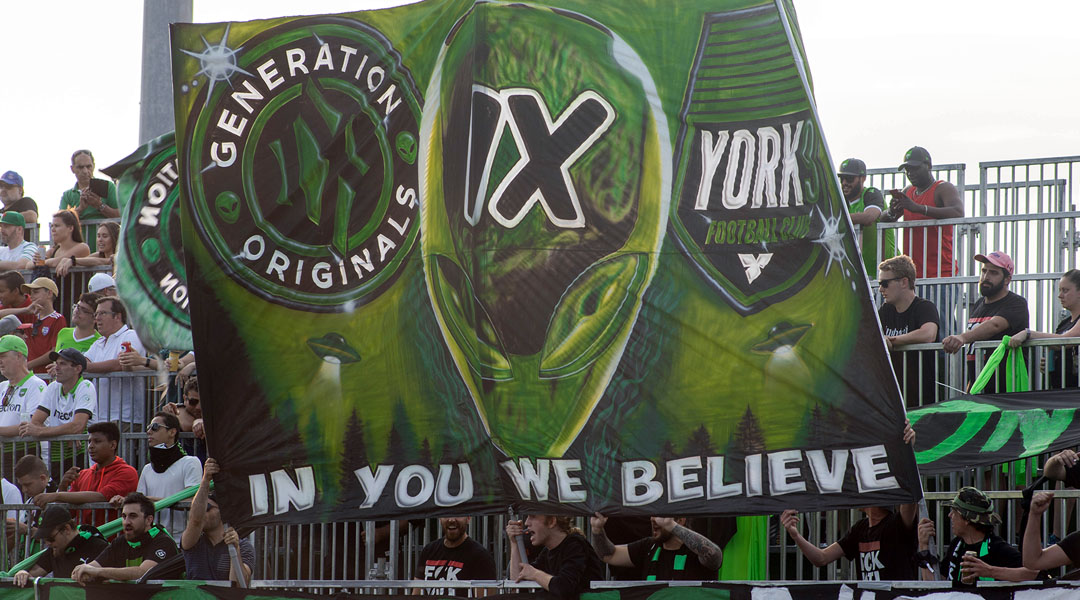 When York9 FC President Angus McNab revealed that the club was evaluating whether it made sense to have the Canadian Premier League club undergo a potential rebrand, it sparked a lot of discussion from fans across the entire league. When the club began calling season ticket holders to ask their opinions on the matter, several members of York9 FC supporters’ group Generation IX began plastering a ‘No Rebrand’ hashtag across tweets from both York9 FC and the Club President himself.

Today, two of York9 FC’s three supporters’ groups have put out official messages protesting the rebrand. Both Generation IX and the student-based Green Lions group have released their own statements imploring that York9 FC stay the course with the club’s current name.

The full statement from Generation IX can be seen below, with the Green Lions statement available here.

We would like to clarify our position regarding the club rebrand. Let it be clear- We are against any modifications to our club’s name and identity. There is no doubt that change is necessary moving forward. The first thing that should be focused on is closing the communication gap with existing supporters. Further focus on the communities surrounding York Lions Stadium is necessary. Improved marketing and outreach strategies is a given. The last thing that is needed is to change the name and identity of our club. With most members outside of York Region, including North York, the Toronto core, from Durham to Peel and beyond, we collectively stand behind the name York9 FC. A crest is much more than a geographical area it represents, but rather what it stands for. The 9 stands for The Supporters, as per our original club mantra. We stand for the 9. We are York9 FC. It is unique, it is ours and we must protect it. The name is central to our identity as a club and supporter group. Any changes should not be taken lightly, and without extensive input and consideration from the clubs Original Supporters. Fight For the Nine, Fight for The Crest, Fight for The Region.

At the present time, the Dames of York9 FC have not released a statement regarding the matter.

Despite today’s statements from both Generation IX and The Green Lions, McNab had previously told Northern Tribune that conversations he held with supporters in a private manner had yielded much different results:

That is interesting as the same members had a very different reaction in the discussions they had with club staff so I feel there is a degree of posturing going on there. I think on social media clubs usually see great cynicism or negativity but the reaction we’ve seen, there is a lot of pro rebrand chat too.

The club’s inaugural campaign saw previous Club President Preben Ganzhorn struggle to fill up York Lions Stadium, with York9 FC finishing bottom of the league in terms of average attendance. McNab was part of the movement which saw many of the club’s 2020 CPL season home games shifted to Friday nights in order to avoid fixture clashes with Toronto FC. He also planned to improve the matchday atmosphere, though the COVID-19 pandemic has obviously nixed these plans for the moment.

With McNab indicating that half of the clubs members hailed from the GTA rather than the York Region itself, the CPL side finds itself at a crossroad: does it modify its identity and marketing to become a bigger draw for the GTA, or does it go all-in regarding the nine regions? A third option – some kind of compromise in the middle – seems more likely, despite Generation IX stating that the group wants no modifications to the club’s name or brand at all.


For the moment, his official survey isn’t an indication that a massive rebrand is already locked in, but it’s clear the club is stewing on the idea while the brand is young. McNab likes the secondary identity of the Nine Stripes, stating that he expects the visuals of these stripes to remain integral to the club’s branding for the foreseeable future even if a name change does ultimately occur.

With McNab and Generation IX clearly at an impasse regarding a potential rebrand, it’ll be interesting to see how things develop if the club decides to go forward with the potential rebrand. Last season, Generation IX held a quiet protest during the last game of the season after the club announced it would be removing the safe standing section on the north end of the pitch.