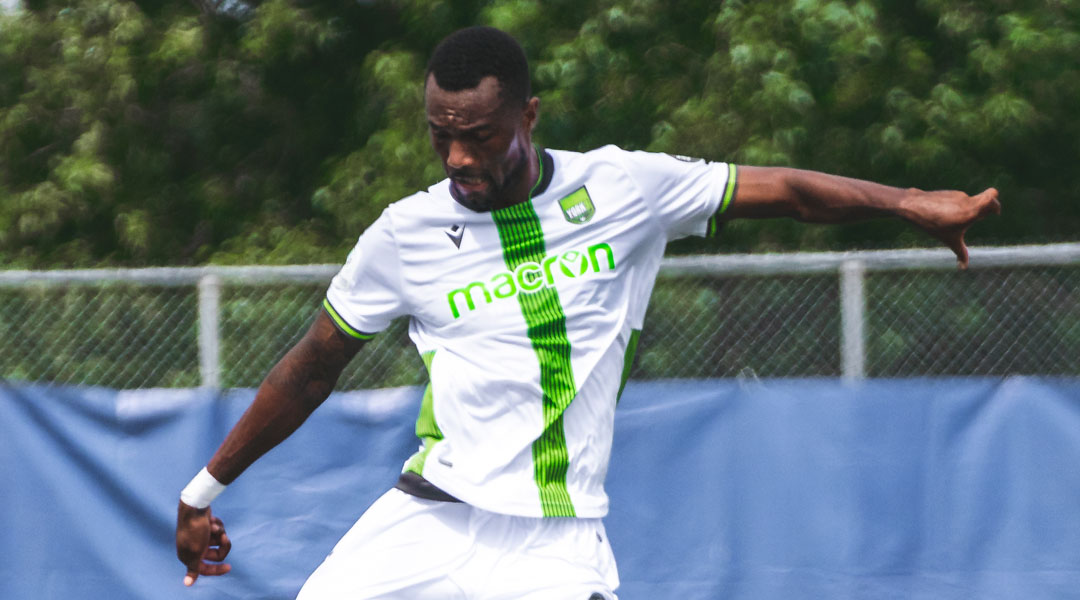 While Canadian Premier League side York9 FC will be mostly fresh faces come next year, one familiar face who has commited to at least two more years with the side is Canadian defender Roger Thompson.

While it was known that Thompson was in talks with other CPL sides during his out-of-contract period with York9 FC (we’ve heard PFC were one of them), the defender revealed that he was considering ‘a couple good options’ in the USL as well. As he’d told us prior, however, being able to stay at home and play in front of his family was a big draw for the tall defender: after all, that was one of the main reasons he first signed for York9 FC almost three years ago after a long stint overseas.

Ultimately, I think it was best that I stay home and continue to enjoy the opportunity to play in front of [my family] and have my friends able to watch the game as well. Being in Europe, well, I miss that a lot, but this is one of the main reasons I wanted to stay.

As one of just three inaugural York9 FC roster members still with the club as it enters its third season, it’s no secret that the six-foot-three defender would make a good option to fill the captain’s role left behind by Manny Aparicio. When asked if he’d been asked to don the armband, Thompson says it hasn’t been something he’s spoken with head coach Jim Brennan about yet, though he’d happily accept the responsibility.

No, it’s not a conversation we’ve directly had, but I’ve always been one of the leaders in the team even with Manu here last year. We have a core group of guys with good experience and we do lead, and I’m one of the leaders on the field. I like to be vocal, and I like to talk. Off the field I’m more humble and laid back, but if the opportunity comes for me to captain the club and lead the boys I’ll gladly take that.

That’s a sentiment that certainly has approval from the former Nine Stripes’ captain, who applauded Thompson’s re-signing on social media as a leader stepping up for the club.

Now two seasons deep into his return home with York9 FC, the Jamaican-Canadian defender has racked up some 19 appearances for the York Region side, which makes him the fourteenth most-capped athlete in the club’s short history.

While the COVID-19 pandemic forced the Canadian Premier League to undergo a short season in a bubble this year, Thompson made good on the opportunity to put in an iron man season that saw him prove solid at the back with a good output for probing, forward passes too.

For the 28-year-old, this helped him repay the faith of fans and staff after he spent the inaugural campaign largely recovering on the sidelines:

Yeah, I think last year was a tough year for me with injuries. I was out for the first three months of the season, and when I was back and I did play around the July time period I did quite well, and the team went on a winning streak and we did well in the Canadian Championship. It was just a taste of what I could do, and going into this year my main goal was to stay fit and play as many games as possible. I’ve been working with my trainers in the offseason and I think it paid off – during the Island Games with Luca and I in the back, we had a strong tournament.

While the familiarity between Thompson and Gasparotto was already there for The Island Games, the 2021 Canadian Premier League season will be different. The York Region side has become the third club to undergo a near-total overhaul following a tough season, just like the Halifax Wanderers and Valour FC did after in the inaugural campaign. McNab has wasted little time following the Island Games to restructure the squad after it missed out on the group stage in the bubble tournament.

As a result, Thompson finds himself one of the few defensive players set to return. The centre-back will be a leading option to start in competition with TFC Academy product Ryan Lindsay along with both of the N’sa brothers.

While he recognized that Luca Gasparotto hanging up his boots was a big loss for the club (the financial constraints of the league are always a struggle – Thompson himself is working some construction in the offseason, for instance), he believes the Nine Stripes are still solid enough defensively to leave fans happy:

Luca will be a big loss. He’s a very hard guy to replace. He and I had a great partnership, and he’ll be missed, but we try to focus on what we have now and the players that we’ve brought in to make the group better. With Abzi, he’s a great player who’s done well in the league, and we have N’sa coming from Halifax who had a great tournament as well, so we are bringing in guys who can improve and replace guys who have gone. I think defensively we’ll be okay, we’ve also brought in Niko from Cavalry and that’s a great addition to our team as well.

The defender noted that while the club is in the midst of an offseason where it has to replace a lot of proven athletes like Di Chiara, Aparicio, Gasparotto, and Doner, he believes the replacements all across the pitch look solid as well – though like many fans, he says the international signings are always a bit of a mystery until they show up.

That’s a sentiment that won’t be new to Nine Stripes fans, who saw highly-touted Corinthians product Gabriel Vasconcelos find himself largely benched this year before the club declined their option on him. In total, he spent just 87 minutes on the pitch at The Island Games.

A few of the international guys are question marks because we don’t know much about them, but when you look at the guys on the roster we have N’sa, Hamilton, we have Jordan Wilson who I’ve known for a long time and know he’ll be a good player as well. We still have guys like Mike Petrasso, too.

Petrasso has impressed on loan at Barnet, scoring twice in seven appearances before his third injury of the year has once again limited the winger’s time on the pitch. With both Petrasso and Hamilton on loan until June, however, it’s going to be mostly brand new faces at York Lions Stadium. In a phrase more oft-used in the likes of baseball and hockey, Thompson offers that the club is in the midst of a ‘rebuilding year’, with some cautious optimism on how it will unfold.

Coming in, signing in my new contract, I know it will be a rebuilding year, but I’m at the point in my career where I’m willing to take on the challenge. I think with a few guys leading the team, the young guys will step up and who knows, we may be a great team. We’ll see how it goes.

The defender made specific mention of Jordan Wilson as a big arrival, with the 29-year-old being another player offering a leadership role for the Nine Stripes. It’s no surprise that he and Thompson have stepped up, given that the duo are the club’s most veteran players among a roster which has an average age of just under 22.

In that, Thompson has only good things to say about the arrival of Joseph Di Chiara’s successor: he’s known Wilson since their teenage days, developing in the GTA before their careers took them different routes.

We’ve played against eachother from U-14, 15, 16. He played for Erin Mills SC and I played for Brampton East, so we’re very familiar with eachother on the field. He’s a hard worker and tackles hard. He’s a team player for sure, and he’s a guy who will be very good for us.

Of note, Thompson isn’t the only York9 FC athlete to have developed in the Brampton area: speedy winger Ijah Halley also developed in the city, with both players – in separate interviews – jokingly suggesting that something was ‘in the water’ there that helped Brampton produce so many professional-calibre athletes.

With several months of offseason left, Thompson has prepared a strict training program starting this month to ensure that the centre-back is in top shape for another potential iron man season for York9 FC.

Now on a two-year deal with an option for 2023, it looks like Thompson will be playing at home in front of family and friends for a good while – though the itch for an overseas return might call for further voyage in the later stages of his career.

With McNab bringing in a flurry of new international talent (including a full transfer of a youngster from Fluminense) along with plenty of young domestic talent to match, one of the big talking points of the next Canadian Premier League campaign will be how a young Nine Stripes squad fares in its third CPL season.

It’s a season in which York9 FC may have a new name to go along with the fresh-faced roster, too.

Whether any veteran talent will be joining Thompson next year remains to be seen, with McNab telling us that there’s no internal deadline for the side’s last three roster spots: he says they’ll remain opportunistic and react to situations in front of them until the roster is complete.

The financial details of Thompson’s multi-year contract with York9 FC was not disclosed by the club.