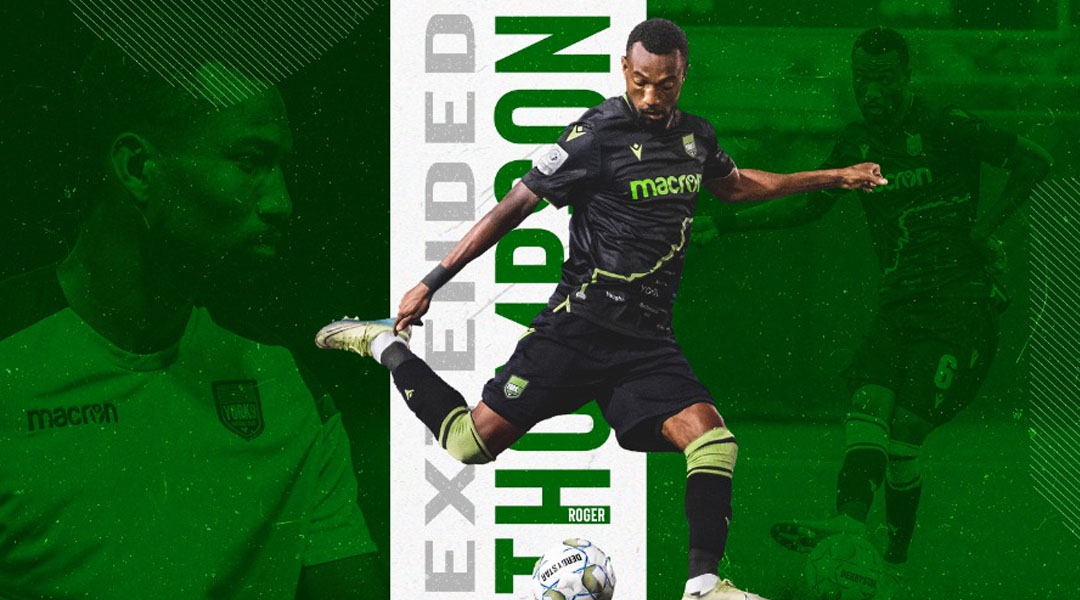 Canadian Premier League side York9 FC has re-signed centre-back Roger Thompson to a two year deal with an option for a further twelve months.

The inaugural squad member had been out of contract since the end of October, and was previously in discussions for a possible intra-league transfer. His return to the York Region club will be seen as a big boost to their defensive capabilities, particularly after his performances this year.

His first year with the Nine Stripes was spent mostly on the sidelines through injury, though he still made twelve appearances throughout the club’s inaugural season. This year he turned heads with his forward-thinking passing and strong defensive performances at The Island Games, with today’s announcement making him the only Nine Stripes iron man to remain with the club following the departures of Luca Gasparotto and Morey Doner.

In our earlier talks with Roger Thompson when he was out-of-contract, he disclosed that he was in talks with two other CPL clubs but ultimately preferred to stay at home if possible. In today’s signing statement, the 28-year-old echoed that sentiment once again:

I left Sweden two years ago to come to York and play in front of my family and that’s what’s most important to me right now. Last season was very disappointing for the team, considering the amount of quality we had on paper. We lost some good players like Luca, who I’ll especially miss playing with, but I know next season is a new chapter for the club. I’m at the point in my career where I’m ready to take on the challenge and I’m here to help lead the team and do the best I can to win every game. I’m looking forward to next season and playing with some of the exciting players we’ve brought in, like Jordan Wilson, Nicholas Hamilton and Chrisnovic N’sa.

Thompson re-joins a defensive line flush with new faces: former TFC Academy product Ryan Lindsay will join him in the middle, while the both Chrisnovic N’sa and Felix N’sa can play centrally or to the right. The left side may see Abzi deployed as a full-back once more, though the club confirmed that it would not be exercising its option on Fugo Segawa with wing-back William Wallace arriving from Fluminense instead.

Surrounded by a lot of youthful athletes, it appears McNab will be leaning on Roger Thompson to lead the backline over at least the next two years:

His performances were excellent this year and I’m delighted he has committed to the club on a multi-year deal. He believes in what we are trying to do here and has told me how excited he is to play with some of the young talent we are assembling. I look at someone like Chrisno and see how great it will be for his development to have a mentor like Rog alongside him within the squad.

With the club describing Roger as a strong leader on multiple occasions, it wouldn’t be surprising to see the Brampton-raised athlete don the captain’s armband for the 2021 Canadian Premier League season and beyond.

The club is in need of leadership figures following the departure of captain Manny Aparicio to York9 FC and the retirement of vice-captain Lucas Gasparotto following stalled contract negotiations. With the club signing an influx of youngsters (aside of Di Chiara’s successor in Jordan Wilson), there are a lot of young players who will need a veteran voice in the locker room.

With 19 appearances for York9 FC under his belt and coming off of a strong Island Games campaign, the return of Thompson is a big boost for the club’s defensive third. With twenty players now on the books for next year, a clear picture of the York9 FC roster has emerged must faster than any other CPL side at this point.

This makes Thompson the last of the expected inaugural squad returnees, with Diyaeddine Abzi and Nathan Ingham having already re-signed for 2021.

York9 FC did not disclose the financial terms of Roger’s multi-year deal with the club.