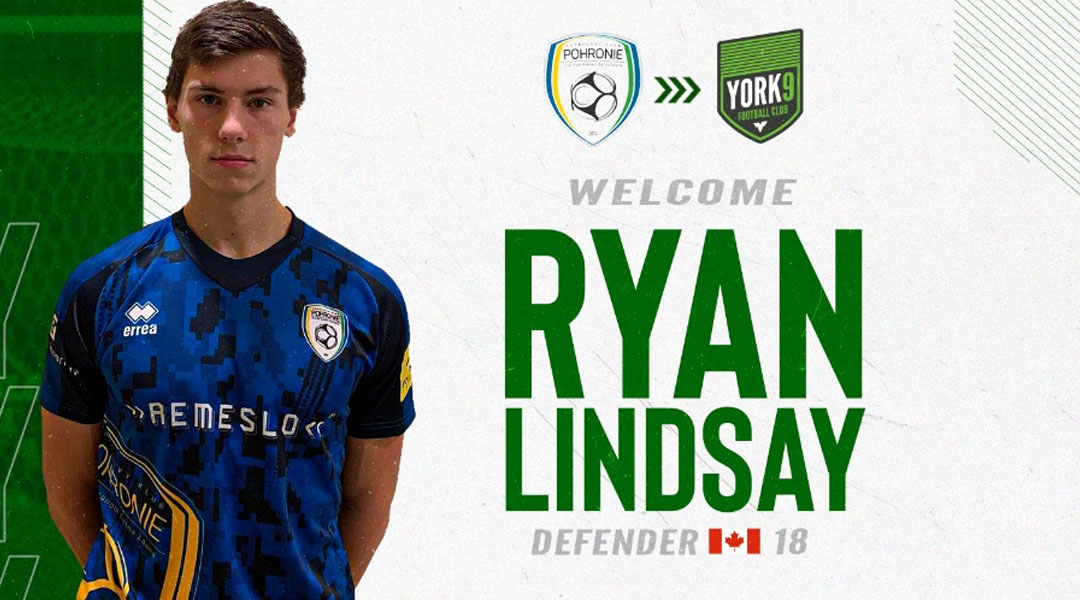 Canadian Premier League side York9 FC has continued its activity in the transfer market by acquiring 18-year-old defender Ryan Lindsay on a two year deal that includes an option for 2023.

The 18-year-old Ottawa native can play as a centre-back or as a defensive midfielder, which makes him a likely replacement for the outbound Matthew Arnone. This season saw Lindsay join Croatian side Dinamo Zegreb at the U-19 level, with the youngster then moving to Slovakian first division side FK Pohronie in August, where he made his debut last month.

A subsequent start in the Slovak Cup for the 18-year-old saw him collect a red card in an otherwise excellent 6-0 knockout win against FK Raca.

Due to the ongoing COVID-19 pandemic, however, he has opted to take his next professional step in Canada:

Ryan is a player who’s had a fairly strange start to his professional career. COVID-19 created havoc with his plans and he’s another example of a player I’m not sure we’d get if the situation wasn’t so inexplicable. His game footage from his time in Europe was impressive and we were able to see some really positive traits: how he plays the ball from the back with such confidence, adjusts then opens his body with his first touch and wants to always progress the ball forward.

As a former Toronto FC Academy player, Lindsay arrives to the Nine Stripes with some familiarity of the club’s teenage contingent. In fact, McNab made mention that Ijah Halley had put in a good word for the defensive-minded teenager:

I had a few words with Ijah Halley on Ryan’s character before we made the offer. Everything pointed to the fact he was dedicated to his craft, wanted to be coached and improve – exactly the kind of exciting young pro we want at this club.

While York9 FC has recently confirmed the re-signing of attacking players like Michael Petrasso and Alvaro Rivero, the same cannot be said for the side’s central defensive performers: at last check, Nine Stripes appearance leader Luca Gasparotto was at an impasse with the club, which could lend more importance to the signing of a young centre defender like Lindsay.

Roger Thompson appears to be a lock to re-sign with the side, though more defensive depth will be a welcome sight for fans. The 2001-born youngster hasn’t met all of his teammates as of yet, but appears quite excited about continuing his professional career at home:

I’m very excited to have signed with York9, as I feel it’s a great fit for me. After speaking with them and hearing about their plans and ambitions, it was easy for me to see that this was the right move. It’s an exciting young team that plays an attractive brand of football that suits me. I also think that the CPL is a great platform for a young player with my profile which is important to me. I’m looking forward to meeting all of the staff and players, and I just can’t wait to get to work.

Club President Angus McNab has been quite busy with roster moves this offseason, so fans can likely expect a flurry of announcements to come later on with many contracts set to expire in the near future. There has been talk that players like Joseph Di Chiara, Ryan Telfer, and Chris Mannella could be outbound, with former Valour FC Captain Dylan Carreiro being linked as a potential incoming player.

Ryan Lindsay appears to be a solid addition to an increasingly young York9 FC side. With the 18-year-old having previously looked much more likely to play for a top flight Central European side next year, it’ll be interesting to see how he develops in the Canadian Premier League instead.

York9 FC did not disclose the financial terms of Lindsay’s contract.