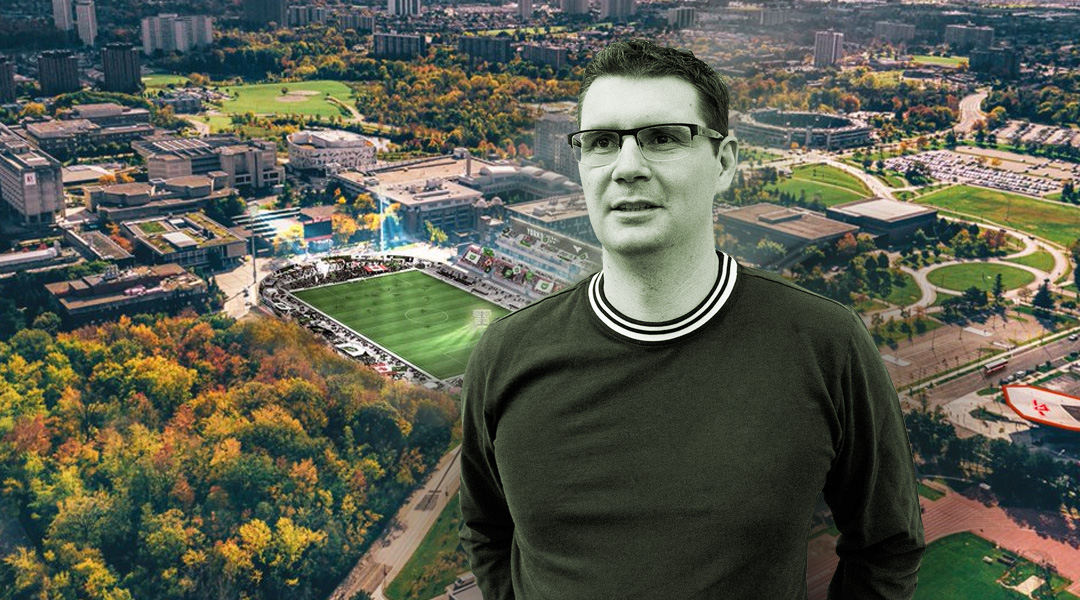 When the inaugural Canadian Premier League campaign neared its conclusion and York9 FC announced that it was removing the northern safe standing section, the reaction from the fanbase wasn’t positive: Generation IX didn’t want to move, with the supporters holding a silent protest during the club’s last home game of the season. Not everyone in the more family-friendly main stand was eager to see smoke bombs and less-family-friendly chanting move closer to their area, either.

In a chat with Northern Tribune, Club President Angus McNab has now revealed that he’s seeking to bring safe standing back to York Lions Stadium come 2021.

McNab says that the location of the future safe standing section is still be confirmed, meaning it might not necessarily go behind the goal on the north side of the pitch. The club has held new conversations with fire services to analyze smoke dispersal in terms of where it drifts, and the best practices on how to allow supporters groups to use smoke in a safe manner. The initial removal of safe standing wasn’t something under his control, with McNab having arrived around Christmas-time to replace the outbound Preben Ganzhorn, and York9 FC being tenants at York Lions Stadium rather than owners. By that point, the stadium layout plan for 2020 was largely set in stone.

The club’s inaugural campaign saw the north side supporter’s end operate in an entirely general admission fashion, and the new terrace would operate largely the same. McNab suggests that a future safe standing section may be more compartmentalized in that it could recognize official supporters groups like Generation IX, The Green Lions, or the Dames of York and price admission accordingly.

Standing is something that I think will be very, very important because we can have a sort of supporters section that is affiliated to supporters clubs if we so choose, and price that accordingly, and then also price the main stand accordingly as well because I think it’s two very, very different fan experiences we can offer. We can have allocated seating in the main stand versus the terrace, and fixed capacity on the terrace and more general admission on the terrace for supporters and people who are part of affiliate sports groups.

The proposed return of safe standing will be positive news for Generation IX, who have recently been quite vocal in their discontent about a potential York9 FC rebrand which could shake up the club’s identity, marketing, and even its own name. For McNab, he says the potential rebrand is a holistic approach that is all about giving the club the biggest possible platform for success. At present, there are no updates regarding it.

When 2021 does arrive, the likely return of safe standing won’t be the only stadium change awaiting fans: York University is still on schedule to remove the track surrounding the pitch, with the stadium owners then poised to expand the size of the field itself. Come 2021, those in the main stand will be closer to the action than the inaugural season allowed for, with the caveat that the new, larger pitch will be artificial turf as opposed to natural grass.

It will be turf in the future. It’s the realities of the country and the weather. Artificial turf brings much, much great revenue potential opportunities. In addition to all of this being done with the track, the pitch can be bubbled as well during the winter months.

Last year, the club also had two swaths of racing seats at the track level which were sold as VIP experiences. Unlike the north side lounge, these seats went largely unused. McNab says premium seating is still part of the plan for 2021, but it needs to be done correctly: food and beverage options for these seats will be evaluated, and the seats will likely will be covered from the elements. There’s also the possible introduction of sponsorship opportunities involving the pitch-side seats. For instance, if some of the seats aren’t being used for a particular game, the club may upgrade some season ticket members from the main stand to the premium seating on behalf of a corporate sponsor.

It’s yet another move designed by Angus McNab to maximize the sustainability of the club and improve the overall matchday experience for fans. Beyond the push for Friday Night games that will avoid conflict with Toronto FC home games, the sports consultant had also talked about themed food nights, like Brazilian fare to celebrate the signings of Vasconcelos and Jaco. Of course, the COVID-19 pandemic nixed the impact of either idea for the time being.


In the meantime, York9 FC has upped its media game under McNab’s guidance, posting sponsored Inside Training videos and keeping fans engaged with posts that help fans get to know the players. It’s engagement by polished design, and it’s working: some users on social media speculated that OneSoccer was actually producing the content, rather than York9 FC’s own media team.

There’s a need for us to do that, first and foremost for our fans to inform, entertain, and keep up to date with everything that’s going on in the club, but we’ve also got to establish our value to sponsors and partners on that side as well, and that’s increasingly important when we’re not able to get out to the stadium right now, that we can get active engagement with our fanbase.

McNab isn’t afraid to shake things up even if it sparks fiery discourse from fans, but his plan to bring back safe standing is likely to be a popular one with club supporters. Of course, the long term plan for York9 FC is still to seek out a stadium site where the Nine Stripes can build their own home ground. McNab says that the club has held discussions about several potential stadium sites since he’s arrived, indicating that the plan to move appears to have not changed even in the face of a potential rebranding – they’ve just got to do it right, and McNab trusts the Baldassarra Family in this process.

They’re a family that knows the true value of land, and they’re a family that knows how to build successful commercial property businesses. We can’t get caught into the trap that many clubs, many stadium developments do in that you put a stadium up and it’s ‘so what? What next?’ It sits and it’s not used and becomes sort of a white elephant. It has to be the right site, and there so many factors that go into that. It’s about building a successful partnership, and thinking about the long term future for not only for us a football club but also the community as well, and their use of the property and how it all comes together

York9 FC is currently in the second phase of training as the club prepares for a modified 2020 Canadian Premier League season that many had assumed would be announced this week. McNab says Brennan and the technical staff have done a wonderful job guiding the players back to fitness, though it remains to be seen when the club’s twenty-two man roster will return to competitive action.

Once the modified CPL season takes place, York9 FC will then compete in the 2020 Canadian Championship in the fall, though it’s unknown if this will involve any home matches. Whatever takes place, the next time York9 FC kicks a ball in competitive play after that just may be in front of a new safe standing terrace come 2021.