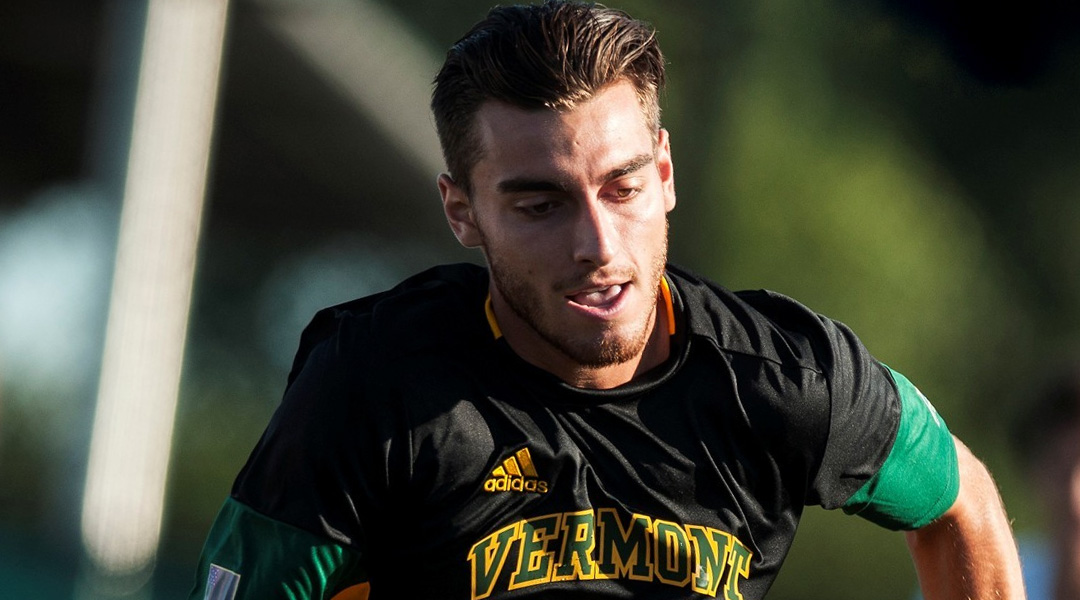 Almost a month ago, we asked York9 FC gaffer Jim Brennan about the status of Jose Pina’s transfer, since the Venezuelan midfielder had been announced in April but had yet to step foot in Canada due to visa issues. Brennan was transparent in his answer, stating that Pina’s ongoing visa issues may force the club to nix the transfer entirely and bring someone else in while the fall transfer window was open.

Today, a new York9 FC roster profile appearing on the official Canadian Premier League website may have leaked that new signing: it appears to be Stefan Lamanna, a 23-year-old forward from Pickering, Ontario who’s also capable of playing on the left wing.


Lamanna played for the University of Vermont during his senior post-secondary years, where he contributed ten goals and six assists over 42 appearances, and was a member of the 2015 America East All-Conference Second Team. While still a student, he also played with local League1 Ontario side Durham United, where his debut season in 2016 saw him score an impressive five goals in eight appearances. He’d get more gametime the following year, registering five goals and two assists across 17 appearances.

Lamanna most recently played overseas in Iceland, where he played for a second division side called UMF Tindastoll. During his time in in the 2. Deild Karla, he helped guide the team to an eighth-place finish out of twelve.

After his stint in Iceland came to a close, Lamanna returned to Canada and left the professional sporting game. He began working as a Xerox account executive three months ago, where he found himself in a similar situation to Nine Stripes Vice-Captain Luca Gasparotto: the tall center-back had found himself working at a local Toronto bar while waiting for his Canadian Premier League contract to kick in ahead of the inaugural season.

Lamanna, however, couldn’t have known if a good opportunity to ply his trade as a professional athlete was on the horizon. It’s unclear if the 23-year-old has been trialing with the Nine Stripes for any significant amount of time, but the fact that York9 FC was trying to bring in Jose Pina to fill the club’s last roster spot would have been a known element the entire time.

At face value, Lamanna is a player who has yet to prove himself at the professional level. It’s not known if the club intends to play him as a striker or out on the left flank, which could allow the likes of Ryan Telfer to take on a more central role. If he’s playing directly up front, it’ll be interesting to see how he fits in with the likes of Adjei, Gattas, and Rollocks.


York9 FC had similarly quiet announcements for both Pina (oops) and Nathan Ingham, who was announced at the club’s kit launch but only got an online announcement through the club’s Instagram a few days later.

Of course, Lamanna’s signing isn’t official yet, though it’s more than likely that the Nine Stripes will announce the Canadian midfielder in the near future. For Brennan, it’s a fairly straightforward swap: a 23-year-old international attacking player has been replaced with a 23-year-old domestic attacking player, albeit one with perhaps more to prove.

The club is coming off a narrow 3-2 aggregate loss to the Montreal Impact in the Canadian Championship, but has started off strongly in the fall season. With York9 FC assistant coach Carmine Isacco staying that fans can expect to see heavy squad rotation throughout the year (and Brennan putting that into practice during last week’s win over Pacific FC), we’re guessing that fans won’t have to wait too long in order to see Stefan Lamanna make his debut.

That’s assuming he officially gets signed, of course. Given that he’s up on the CPL website and the fact that York9 FC started following him on Instagram, we expect it’s just a matter of time.