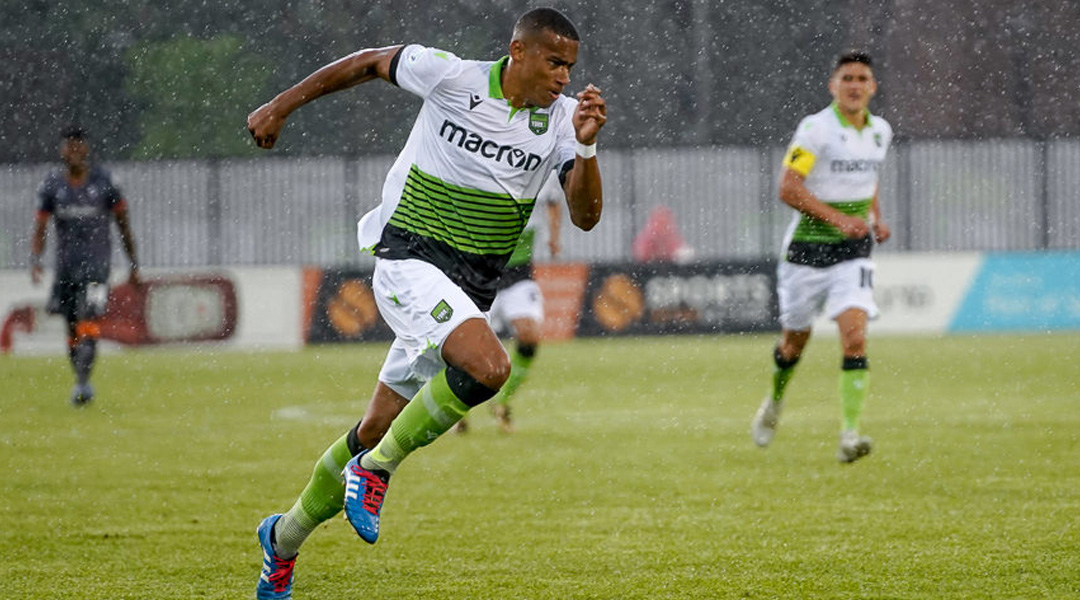 When the Canadian Premier League played its inaugural game almost exactly a month ago, York9 FC manager Jim Brennan said he was happy to secure a draw and spoil the party for Forge FC’s first home opener. Yesterday, Forge FC were the party spoilers, securing a 2-0 win in a game that was controversial both on and off the pitch.

While the first half had sunshine, heat, and warm weather, the second half brought both a torrential downpour and lightning. The drenched referee signaled for an all-clear in the 62nd minute when he first spotted lightning, with the game being delayed and fans being told to find cover. Some fans danced in the rain, but the atmosphere died down as the rain persisted.

Security started telling people in the supporter’s end to seek cover outside of the stadium, funneling them out the exit gate. Then, security started telling stadium-wide fans the game was cancelled. Both supporters groups’ took down their banners as rain pooled anywhere it could. Fans pondered when the match would be replayed, as a match abandoned before the 65th minute requires a full restart.

The official CPL and York9 Twitter accounts were silent during the process. OneSoccer spent most of the time airing day-old prerecorded studio footage. Then, some 60 minutes later, came the announcement that 30 minutes had passed since lightning was seen, the officials had inspected the pitch, and the players were warming up to resume action.

It was a paltry crowd that remained, which makes sense considering many were told to go home – and others likely wanted to make sure they could catch the Raptors book their place in the NBA Finals. Only about five travelling Forge FC fans remained. A similarly small handful of fans were in the York9 FC supporters’ end. York Lions Stadium was now holding just about a hundred fans, as a rough estimate.

The delayed half-hour of action would see Forge FC score twice to remain hot on the heels of Cavalry FC in the league table, locking in the first win of the 905 derby. Not many can say they saw it in-person due to the security mix-up. A lot Cavalry and Halifax fans saw it on OneSoccer, which mistakenly streamed the resumed York9 vs Forge game on the Cavalry vs Halifax stream feed.

Before that delay, we had them on the ropes and had plenty of chances. We felt it was coming, but that delay took the wind out of our sails. We’re a bit frustrated the way it came about. We felt we were the better team today.

The signs of miss-communication potential had been there earlier: at the start of the game, security was told by an event staff member that a mobile beer-seller had been refused entry to the away stands. Security said there was no reason they should have been turned away, and by word-of-mouth approval the beer seller was granted entry.

It seems a lot of small communication problems manifested themselves in a big way, resulting in fans being sent home instead of being informed the game status was simply delayed. Forge FC fans who had purchased casino chip-style beer tokens, for their part, were unable to get refunds before being sent home as the outdoor cash registers had been packed up as the rain started.

Many fans have taken their complaints online, with one reporting that he emailed support and was given a free ticket to the next home league game. For those who already purchased season tickets, it’s unclear if any offer will come.

York9 FC is a club of many league firsts: it got the first league goal, the first red card, and now the first weather delay. The club has a good sample size of items to look back on from its first two home games and improve upon. The setup of its outdoor sales tent area was already improved from Wednesday’s mid-week match, though it evidently still has some room for improvement.

Hopefully, the gameday experience will end up for the better from this experience. A lot of drenched fans from yesterday will be adamant that it must.