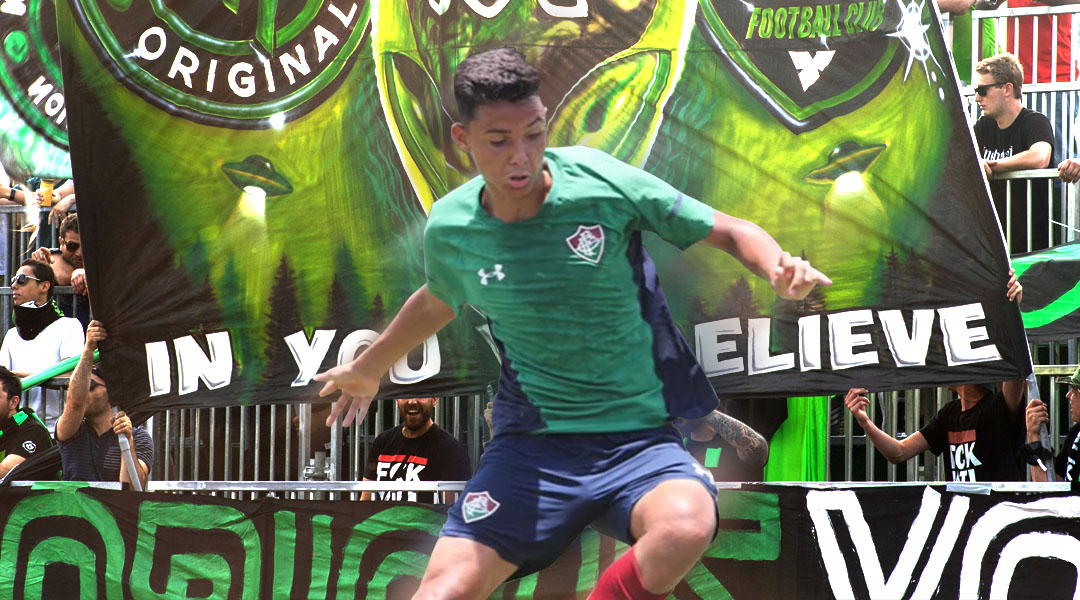 Canadian Premier League side York9 FC has signed a young Brazilian named William Wallace from Fluminense for an undisclosed transfer fee. He arrives on a two-year deal with an option for 2023.

The history-making transfer shows that Y9 Club President Angus McNab isn’t just looking for free agent signings, with the Canadian Premier League club prepared to spend for its investments as the club angles itself to become a selling side.

The fact that the transfer comes straight from Brazilian Serie A side Fluminense will also raise some eyebrows, given that the high profile club has produced the fifth-most players for the Brazilian national team out of all the Brazilian sides.

The 18-year-old Fluminense youngster can slot in both as an attacking left winger and as a wing-back who can also be deployed on the opposite right wing. This offers a fair amount of versatility for the York Region club, who describe the left-footed youngster as someone with electrifying pace.

Wallace will remain in Brazil for the rest of the year, where he’s been a regular performer for the Fluminense U-20 side. He will join the Nine Stripes squad in the new year pending the approval of his paperwork.

Given that the club has refrained from triggering its option for Japanese left back Fugo Segawa, it appears that the 23-year-old may ultimately be being replaced by the young Brazilian. That being said, York9 FC has two international roster spots remaining should it choose to re-sign the defender.

Of course, Wallace’s positional ability on the left flank means that he’ll also be big competition for Diyaeddine Abzi, who started this year’s campaign as a full-back before taking on a more direct attacking role as a winger. With Petrasso gone on loan until June, it’s easy to see Wallace filling out on the right, too.

First of all, I would like to thank Mr. Mario Bittencourt, President of Fluminense FC, for his time and willingness to work with us on this transfer. We respect Fluminense as a true giant of world football so to conclude this agreement with them is a big moment for our club. William is a player that has unbelievable potential. His ability and versatility as a winger, midfielder and wing-back is really impressive. He’s been a regular for Fluminense’s Under-20 side and his performances really caught our eye. He’s got the ability to contribute on both sides of the ball and is a great addition to the squad

The club has also remained quiet on the possibility of left winger Ryan Telfer returning, but did ultimately lock in bilateral winger Mateo Hernandez as a possible replacement for him last month.

Prior to signing with Fluminense, the club states that Wallace was a standout performer in the U-17 Campeanato Cearense, which led to his signing with the Serie A club’s youth setup where he’s been a regular performer this year.

Of course, the arrival and quick departure of former Corinthians man Gabriel Vasconcelos might be a note of caution to follow for hopeful York9 FC fans.

With the Nine Stripes roster now only four players away form being full, fans are getting a clearer picture of what next year’s squad is looking like. McNab has made a lot of changes to the roster following the club’s fifth-place finish at The Island Games this summer, with Wallace being the ninth brand new signing in the two months following it.

The new signing says he can’t wait to arrive to Toronto (which remains a big selling point for the club) and get to know both the fans and the city.

It’s going to be my first time playing abroad and the Canadian Premier League and York9 is a place where I’ll be able to keep improving my skills and show off my talent and hard work. I want to thank Angus McNab for his efforts to sign me and Fluminense for all their support in my career. I am now really looking forward to meeting my new teammates, the coaching staff and – of course – the amazing fans. See you guys soon!

This week the club also announced the signing of goalkeeper Niko Giantsopoulos along with Impact Academy product Cedric Toussaint, with a flurry of preceding young signings seeing the club’s average player age drop down to under 22.

Given that full transfers are against the usual modus operandi of Canadian Premier League clubs, there’ll be a lot of eyes on William Wallace Monteiro De Lima to see how he fares with the York Region club. While only time will tell in regards to if the youngster raises his profile and sells for a profit, it’s certainly an ambitious signing for the domestic club.

Last year saw York9 FC sell Emilio Estevez after his debut for the Taiwan national team spurred interest from Dutch side ADO Den Haag. After a quiet Island Games performance, the club will be hoping to raise the profile of many of its youngsters in the 2021 Canadian Premier League season.

York9 FC did not disclose the financial terms of William’s multi-year contract.