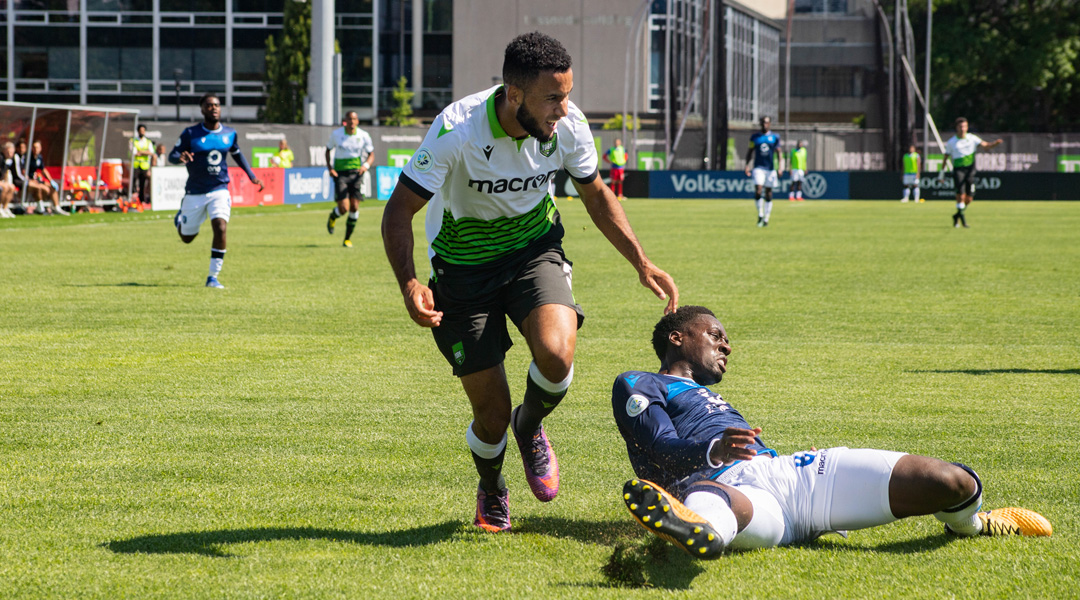 After starting off its fall season campaign with a 1-0 loss to the Halifax Wanderers, Jim Brennan’s York Region team has been on a good turn of form since: the club made Voyageurs Cup history by holding the Montreal Impact to a 2-2 draw last Wednesday, and today the club earned its first three points of the fall season following a 2-1 home victory against FC Edmonton.

Week-in and week-out, Jim Brennan has repeatedly emphasized that his 23-man roster is constantly improving with each passing game. Speaking with members of the press after today’s home win, York9 FC fullback Morey Doner made no bones about it: the club feels that it can contest for the top spot of the fall season table – among other things:

Doner also commented that that there was a ‘quick turnaround’ between games for his side this month, and he’s quite right: the club will play four games in the span of ten days starting this Wednesday. While this congested schedule puts players at a higher risk of fatigue and injury, the momentum this kind of run can generate may help propel York9 FC to contend for a spot at the top of the fall season table.

Doner’s statement was a confident one, but that’s the kind of mentality he thrives off of:

“For me, I’m a confidence player. When I do something good on the field, I really thrive on that and go forward and make a good run, and that really gives me a lot of motivation. These last few games, I’ve just been riding the wave. The fans have been great the last few games. For me, looking over and seeing those people really makes me bring the best out of myself.”

With Cavalry FC being the only club to have two wins after two games played, Jim Brennan’s team currently finds itself in the middle of the pack with three points, along with Forge FC, FC Edmonton, and Halifax Wanderers. Valour FC has yet to play, while Pacific FC has lost its first two games of the fall campaign – though the return of Hendrik Starostzik should help provide a much-needed boon for the Vancouver Isle side.


With Samuel Piette having been impressed by the quality of York9 FC after squaring off against them in the Voyageurs Cup, it’ll be interesting to see if the Nine Stripes can build a good run of form to kick off its first month of fall season action and, as an outside chance, provide a shock result at Stade Saputo later on this month. The club is already two points ahead of where they were in the spring season by this point, but there’s a long way to go until fall season of the Canadian Premier League is decided.

The club’s gaffer has a lot of respect for his league opposition, but at the end of the day he says the squad improves by focusing on what they’re doing, rather than what the opposition has been focused on:

“We watch a lot of tape, a lot of video, of the opposition, and see what the other teams are doing. When it comes to these guys, we just focus on them. Focus on our team. We’re trying to improve them every single day, and really our focus is all about us. It’s not about what other teams are doing in the league, or who we’re playing against. The focus is on these guys and getting them to believe in themselves, sticking to our game plan, our tactics. That’s our goal within our club, it’s to look after ourselves and make sure we do things right.”

The inaugural season of the Canadian Premier League will see plenty of exciting Canadian sports history unfold. With Cavalry FC securing the spring season, there’s only room for one other team to join them in the two-legged Canadian Premier League championship. Doner and Brennan are confident that their squad can compete, with the latter saying his side will fight ‘tooth and nail’ until the very end.

Whether that end comes in the form of the Canadian Premier League championship or with an inability to top the table remains to be decided, but fans of the York Region team will be hoping that Doner and the rest of the 23-man squad can keep it close.