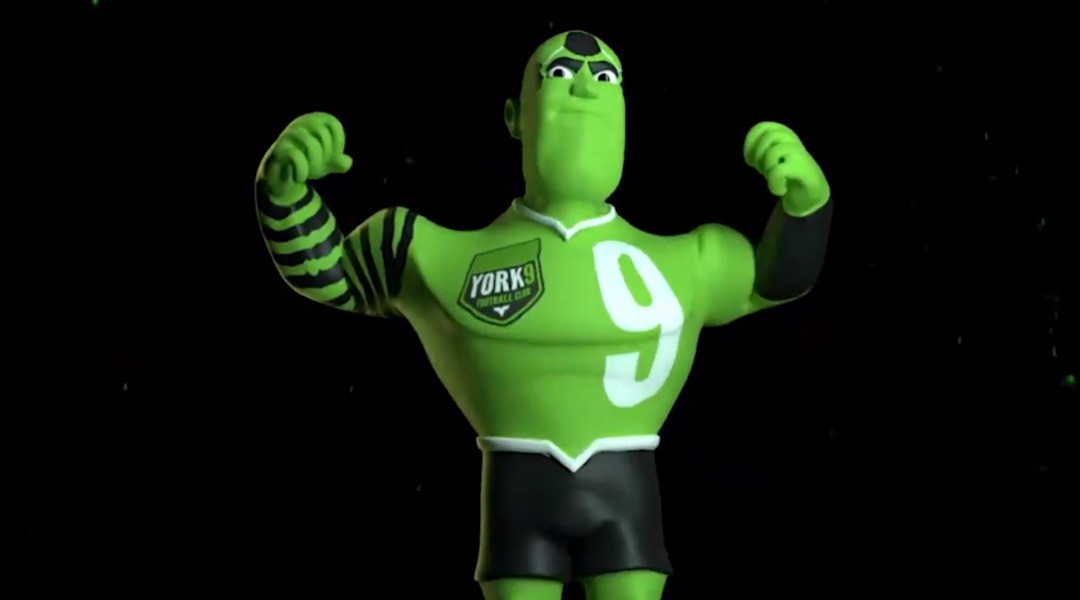 While one could be forgiven for assuming that York9 would have gone for the obvious choice in a Yorkshire Terrier, the Nine Stripes’ mascot is a time-travelling droid from the year 2219. That’s a pretty deep backstory for the robotic mascot, who says Jim Brennan is one of his all-time favourite players – and will apparently score a hat trick in a York9 Legends game at the age of 63.

According to an interview with Yorky himself, he captains the team in 2219 and travels back in time in order to help the squad to victories in the present day. When CanPL Editorial staff asked what was up with his head (which is a fair question), here’s what the mascot said:

The inspiration for Yorky’s personality falls heavily on Zlatan Ibrahimovic, with the droid speaking in third person and saying things like ‘A World Cup without Yorky was nothing to watch’ and ‘Yorky doesn’t do auditions’. To that end, Zlatan certainly has a soft spot for kids – so despite the ego, Yorky should be able to entertain the young masses.

With Yorky now revealed, York9 FC becomes the final Canadian Premier League team to unveil its mascot. With the league now having everything from a lion to a starfish (and local rivals Forge FC even having a dragon named Sparx), there’s a wide range of mascots to keep children entertained coast-to-coast.

Initial fan reaction from adults has been predictably less than positive, but most mascot-related announcements have gone that way for the league so far. Fortunately, adults definitely aren’t Yorky’s target audience.

Yorky will make his debut on this Saturday as York9 FC hosts local rivals Forge FC. The Nine Stripes had a chance to spoil Sparx’s home opening party during the inaugural game, which ended in a 1-1 draw. Whether Yorky will get to celebrate his first win remains to be seen, but one thing is certain: mascot or no mascot, the atmosphere will be intense.