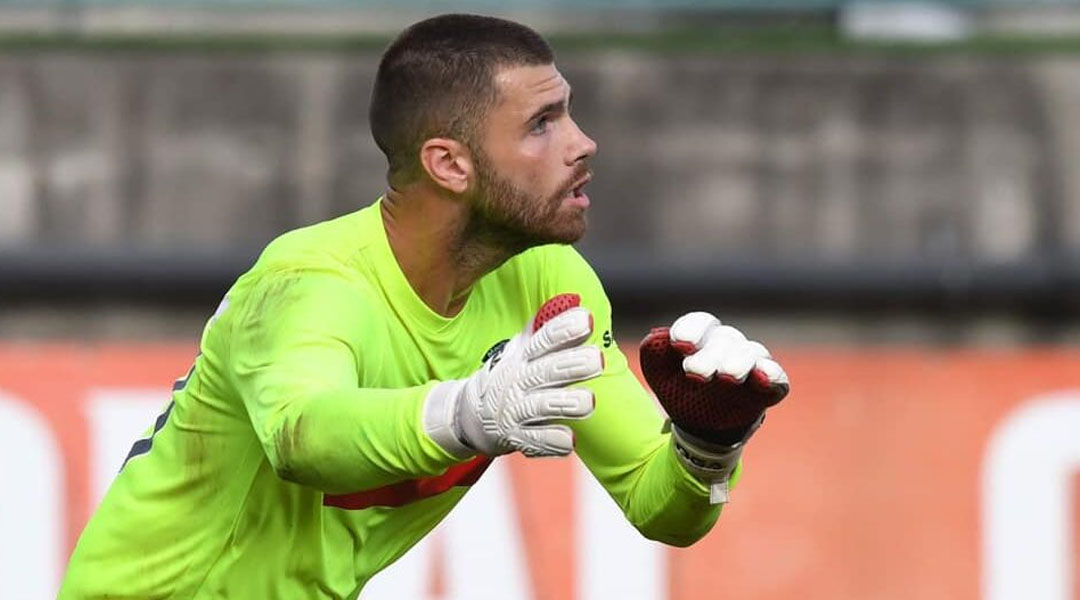 Former Maritimo goalkeeper Matthew Nogueira can count himself amongst a growing number of Canadians hoping to continue their careers back home.

The 23-year-old free agent has had interest from CPL and USL clubs, with MLS Next Pro remaining a possibility as well. Nogueira – who has spent his entire professional career abroad – returned back to his hometown of Toronto in the fall, hoping to remain somewhat close to his familial roots while showcasing himself in the North American market.

It’s a market that offers Matthew more stability and game time than he’s seen in the past year.

The past season saw Matthew land with Serbian second division side FK Zlatibor, who brought him in with aspirations of a return to the first division but then underwent a transfer ban on foreign talent after not paying athletes who were owed compensation from the club’s time in the top flight.

It wasn’t a pretty situation. He would have had to wait several months before the ban lifted in January to officially sign, and that brought an air of uncertainty about if it was the right move. Instead, Nogueira came home.

“Even in my last year with Maritimo before that, I was already looking at the CPL and seeing the growth, and thinking it might be good for me mentally and in different aspects. After Zlatibor, I thought the best decision was to come back and find opportunity here.”

While he’s still getting acclimated to the weather – last week’s blizzard in Toronto was a far cry from what he was used to in Madeira – he’s settled in well, enjoying time with his daughter, and fully focused on seeing what comes next.

The six-foot-three goalkeeper has spent most of his career in Portugal, where he developed with Benfica and Gil Vicente before proving himself in the lower divisions and eventually landedwith Maritimo. That’s where he was at when he accepted a call-up to the Canada U-23 squad for the Olympic Qualifiers, putting him on a lot of radars back home.

It was in Toronto where Matthew’s career got its first real start. He was just ten when caught the eye of Portuguese goalkeeper coach Nuno Santos, whom Marc Dos Santos once described to us as one of best trainers to ever work with the Canadian national team. Santos is now with Jose Mourinho at Roma, but back then he was running camps in Toronto.

“He’s a very good coach,” echoes Nogueira, “he’s a hard worker who helped me a lot. He kickstarted my career, and brought me to Benfica because he saw the potential I had. He trained me hard – when I was ten, I was training with kids who were 18. Sometimes I would come back with legs filled with blood and scratches, but it’s because of that I was able to start somewhere.”

He was just twelve when his family travelled with him to Portugal, where he trialed with both Benfica and Sporting Lisbon simultaneously before the former offered him a spot to stay. He developed with the Primeira Liga youth team for the next several years before the birth of his daughter in Canada saw him spend a stint developing with Toronto FC instead.

“I never had my father in my life, so I know what I had to do to be in my daughter’s life,” he says, “I started working to be closer to her. I told Benfica I wanted to leave knowing the fact that I was going to have my little one in Canada. I worked back here, but the urge to play, when you have that passion, you don’t just give up. I reached out to Toronto FC and they brought me in, and I stayed with them for a year.”

With Alex Bono doing well with TFC II at the time, Nogueira knew that a professional call-up was unlikely in Toronto, and set his eyes back to Portugal to advance his career. He landed with Gil Vicente as an 18-year-old, playing with the junior side before moving on to his next opportunity elsewhere as a senior athlete.

He landed in the Portuguese third division with Fornos de Algodres, where he was put behind a local goalkeeper and had to wait for his opportunity to play. He got his chance after a rough spell of form saw the side rooted in dead last, dropping a string of results on the bounce. His opportunity came against first-placed side RD Agueda, where a man-of-the-match performance drew immediate interest from the league leaders.

“I wasn’t under any professional contract, so I went to the first-placed team in the third division. First or last, let me tell you: it’s hard down there. You have to have a lot patience. Money-wise, the environment, everything, it’s hard, but on the plus side a lot of top teams look there for talent because it’s good quality, and it’s cheap.”

Matthew found himself placed behind Agueda’s starter, and a similar theme panned out: he bode his time on the bench and got his opportunity after a string of bad results. Seizing the chance, he played the rest of the season, with the final match of the season coming against the Maritimo B team.

“I dislocated my finger before he game,” he admits, “I told my coach I wanted to play anyway. I taped it up, played, and had a really good game. Maritimo contacted me after the season when I was back in Toronto, and they gave me a three-year contract.”

What followed were plenty of ups and downs: his first season with CS Maritimo saw Nogueira get plenty of playtime, which wasn’t something he was anticipating. “I was expected to play for the B Team or the U-23 team, and I played good for both. They called me up to the first team for the league cup, which I played. I was on the bench for a few league games after that, and overall my first season went well.”

It was a big rise for a young Canadian-Portuguese talent who, not long before, was latching onto an opportunity with a bottom-placed third division side. His second season with Maritimo would see a preseason injury curtail his momentum, however, and his time with the club would end at the expiry of his three-year contract.

It was after that when he went to Serbia, where an air of uncertainty about if it was the right decision prompted him to come home.

Nogueira is enjoying being back with his daughter, and has opened channels at the Canadian Premier League level and a few clubs stateside, too.

“I’ve kept up with a few CPL matches,” he adds, “there’s a lot of talent there. It’s growing. The most important thing for me now is game time. I want to break into the Canadian national team. I was there for the Olympic qualifiers, and I love representing my country. I want to be there again.”

While Matthew aims to continue his career in Europe down the line, he wants to remain back home near his family in the immediate future. He’s hoping that he can still showcase himself in North America before the next opportunity abroad.

“It’s all about game time. If you can show your quality, anything can happen. A lot of things happen in soccer, and there’s never a guarantee. Even if they say someone will play, that’s never a guarantee. I believe with hard work, everybody will have an opportunity and then you just have to show yourself. That’s what I plan to do.”