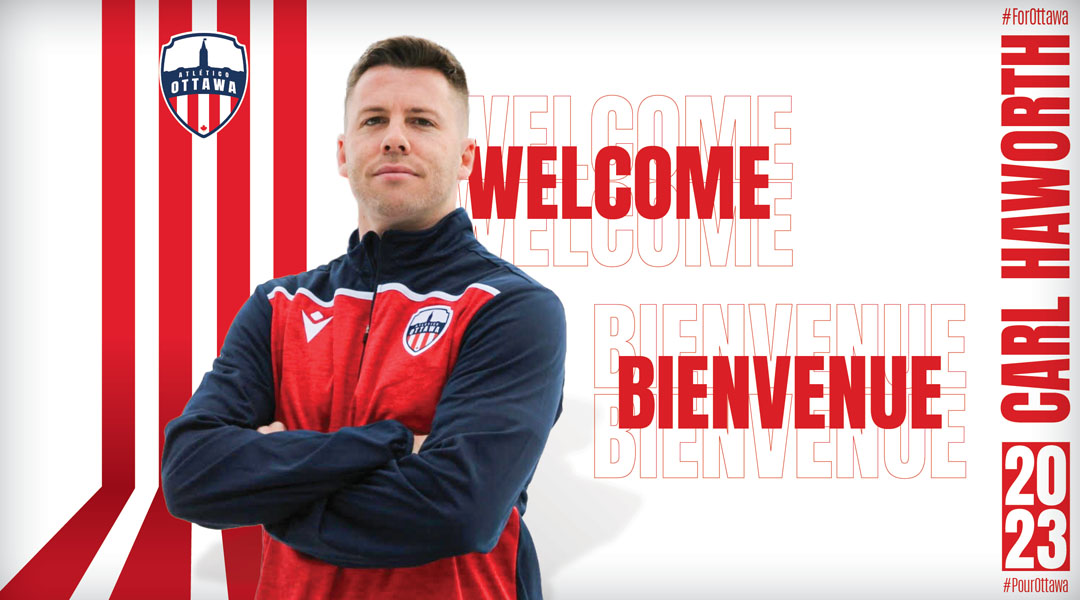 This morning’s signing for Atletico Ottawa is a big one: Carl Haworth has returned to the nation’s capital.

The beloved full-back and winger has signed a two-year deal with Atletico Ottawa, marking his return to nation’s capital after two seasons with USL side Indy Eleven.

Haworth has been a long-familiar face in the Ottawa soccer scene, signing with the Ottawa Fury in 2013 and becoming a mainstay with the side through its PDL, NASL and USL eras. He is the only player to fight for the Fury through its entire existence.

The Barrie-born athlete was a team leader for the now-defunct side in appearances (169), goals scored (27), and assists (29) during his six seasons with the Fury, with his final season seeing him collect 10 goals and 9 assists en route to helping the side to its first-ever postseason and named the club’s Player of the Year.

Haworth has a single cap for the Canadian national team, making his debut in a friendly against South Korea in 2016 under caretaker manager Michael Findlay. His time with Indy Eleven held less fanfare, with Haworth contributing one goal and two assists through fifteen appearances.

Here’s what he had to say about a return that fans had been hoping for ever since Atletico Ottawa was first announced:

From the first time I stepped out onto the field to represent the Fury in 2013 I knew it was something special. The city, the people, and most importantly the fans; they’re incredibly welcoming, supportive and make the experience of representing this city truly amazing. Once the opportunity to come back presented itself, it was a no-brainer

The Ottawa fan-favourite describes Atletico Ottawa as a club with an exciting project ahead of it, stating that he’s ready to embrace the challenge of bringing success to a club which finished bottom of the table last year.

Like the club’s acquisition of Maxim Tissot, he arrives as a leadership figure who can install a winning mentality at TD Place.

Given that Atletico Ottawa is still without a head coach, it remains to be seen how Haworth will be utilized: he can certainly contribute as a right-back, though the club also has Zach Verhoven and Miguel Acosta in those positions. He can also play further up the flank, with Lopez also noting that he can be utilized in a more central position like he did under Marc Dos Santos, too.

For whatever it’s worth, the club listed him as a forward on the team sheet.

We expect him to provide this team with tons of scoring opportunities, whether directly from his boot or by setting up his teammates. One thing we know is that he will have an immediate impact on this team and in this league, and we’re thrilled to count on him as a member of our Atletico Ottawa family.

With 16 players announced so far and more to come in the near future, Haworth is confident that the current group of players has the right combination of experience, leadership, and talent that is needed for sustained success.

I’m excited to reunite with the old fanbase as well as all the new faces that have supported Atlético Ottawa over the past few years. I can’t wait to get started and I’m looking forward to seeing you all out at TD Place this season!

The club had already launched a Carl’s Back Three Pack ticket bundle to celebrate his return, which includes a ticket to the home opener and two tickets to use anytime throughout the 2022 CPL season. It also includes a friend voucher, allowing ticket holders to introduce a plus one to the mix at one of those matches – not a bad strategy from the front office.

Carl Haworth arrives on a two-year deal and is expected to play a key role in the club’s efforts to rise up the league table.