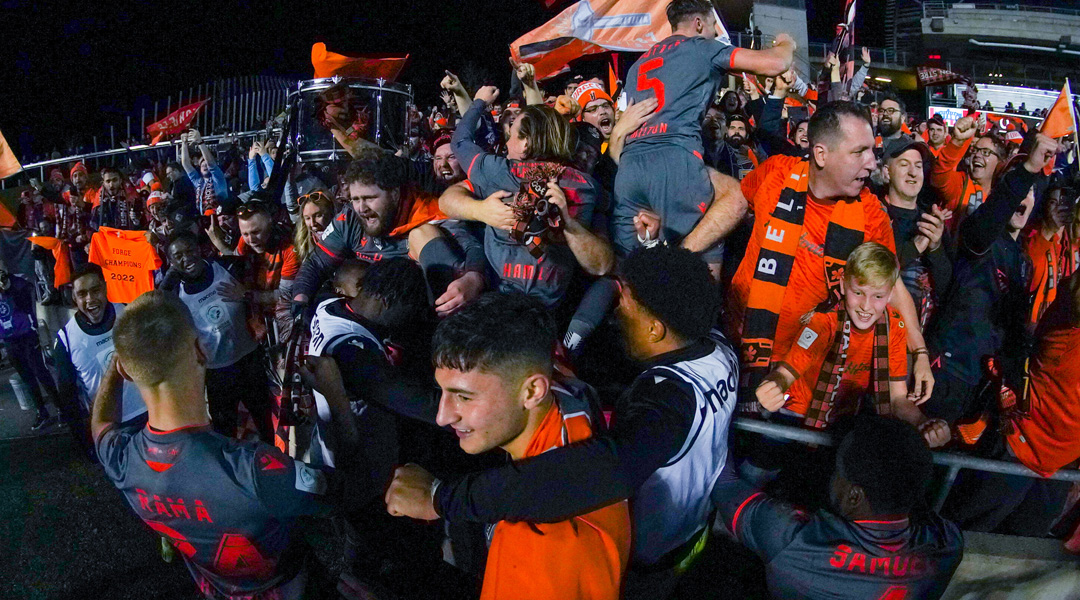 Following Forge FC’s 2-0 victory over Atletico Ottawa, both coaches as well as Carl Haworth of Ottawa and David Choiniere of Forge spoke to the media.

Coach Carlos Gonzalez was very calm when coming into the room, explaining to me that he had every reason to be tranquil despite the defeat. When asked about what moments of the season stood out to him, Gonzalez said that there was not any moment in particular as the players stepped up to the plate from day one and provided several memorable moments. While he was disappointed in the loss, the Ottawa gaffer hailed the 15,000 fans that went out to TD Place that evening.

His opposite number Bobby Smyrniotis hailed the scores of people who made the trek to the stadium. When asked about the feeling of celebrating the title in front of 200 travelling fans, he said it was “special,” stating that he is blessed to have been at the club for so long and built a foundation in Hamilton. Smyrniotis joked about hoping that Forge patron Bob Young does not sack him in the future.

Carl Haworth was the player representing Ottawa, with questions being asked about his journey to to the city. He recounted Julian de Guzman telling the media that Ottawa Fury was no more and the sadness of the announcement. Having plied his trade in several leagues in North America, Haworth was impressed by the support that came out, mentioning the importance of growing the game here in North America.

As expected, David Choiniere was very gracious when asked about the importance of scoring another goal in a final. He was quick to point out that it was moreso “about the team.” He felt that this was the perfect way to end the campaign despite losing out on the regular season title to Ottawa. When asked about whether winning this trophy felt like having the last laugh, he echoed Smyrniotis’ response, mentioning that he didn’t see things like that. Forge won their third CPL title in four seasons, getting goals from Alessandro Hojabrpour and David Choiniere in each half.