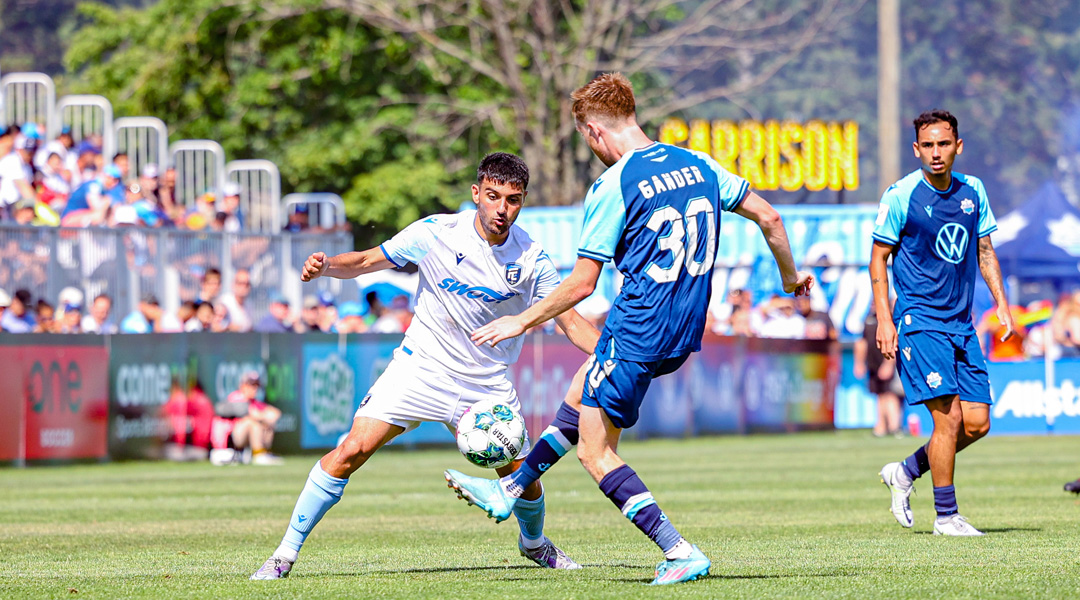 After impressing on loan with FC Edmonton in 2022, Wesley Timoteo now joins the Halifax Wanderers on a new two-year deal with an option for a further year.

After having spent his prior eight seasons abroad, Timoteo’s return home saw him play just about everywhere on the pitch, completing a head-turning Canadian Premier League campaign that will have a lot of eyes on him come 2023.

It’s been a long journey for the 22-year-old Montrealer, who recently took time from his offseason training to speak with us about his career path so far.

Timoteo’s start in football came early through his family’s Portuguese heritage, which meant that growing up every weekend had the country’s top flight on the television, and no national team matches were missed. Surrounded by the passion of his family, it didn’t take long for football to take root in young Timoteo’s heart.

“I remember my Grandpa took me to Toys R US and told me ‘get anything you want for Christmas,’ and the the only thing I took was a soccer ball,” reflects Timoteo. After that, it was Tim Hortons football for little Wesley, who worked hard in training before impressing at a national ID camp and getting picked up by the CF Montreal Academy.

Rather than following the domestic pathway, though, Timoteo branched out to European pastures through a connection from a family friend. When he was 14, he featured in a Swedish tournament called the Gothia Cup. Turning a few heads, he was offered an academy spot with Portugal’s Esperanca de Lagos, using that opportunity to later land with Belenenses and Estoril, where he suited up against the youth ranks of clubs like Benfica, Sporting Lisbon, and Porto.

“Initially I was suppose to be there for a month and come home,” reflects Timoteo. “It started with a small tournament in Sweden, and ended up being eight years in Europe.”

Timoteo’s penultimate season abroad saw him join Cypriot side PO Xylotymbou, where former Valour youngster Tyler Attardo also happened to land. Wesley had followed the launch of the CPL with plenty of interest, with his conversations with Attardo only growing it. He returned to Portugal with fifth-tier side SC Lusitania afterwards, but the seed was planted.

“That’s when I started talking more with my family about coming back to Canada. After eight years of being so far from family and friends, and seeing how soccer was growing in Canada, I had to start searching more for the chance to come. I got a trial with Edmonton, and as soon as that door was open I didn’t think twice: I packed my luggage and I came.”

Timoteo was so deadset on signing with FC Edmonton that he showed up to the trial with everything he owned: nary a sock was left behind in Portugal, where he’d been training to stay fit ahead of the trial opportunity. In his mind, if he was coming all the way from Europe to Edmonton, there wasn’t a chance he would let himself leave without a contract.

Impressing at Alan Koch’s training camp, Timoteo was handed the contract he was looking for, which is when he first heard of FC Edmonton’s financial problems. He hadn’t been expecting to sign a deal with Halifax rather than Edmonton, and was understandably a bit confused, but opted to go for it anyway.

Timoteo’s campaign got off to a great start, coming off the bench to assist Tobias Warschewski’s wondergoal in the season opener. Wesley earned a start from Koch after that, and began accruing serious minutes. He fully immersed himself in the CPL world, watching every match he could and absorbing feedback from the coaching staff.

“When you get a one-plus one contract, your first year is to show yourself, to prove you should stay in this league. Your first year is more of a test, so each game and practice it was on my mind that I was required to show myself, and of course help the team win, but also prove to people that you deserve to be here next year.”

He finished with three goals and a team-leading six assists through 27 league appearances, appearing in all but one of FC Edmonton’s matches throughout a head-turning campaign. His versatility was put on full display, with Timoteo featuring as a full-back and winger on both flanks, and as an attacking midfielder too.

Of course, being a regular with FC Edmonton meant that he actually suited up against his parent club four times, twice at home and twice away. It was a golden opportunity for Timoteo to a get a glimpse of where, if he played well enough, he’d be suiting up regularly next year.

“I love playing there,” he said of Wanderers Grounds. “I felt the love from the fans from the very first game. There was such atmosphere, as soon as you start to warm up the stadium is almost full. Real fans, they love the team, we’re walking the streets of the city and they know we’re there.”

Timoteo’s first match on the east coast saw fans call him by name, asking when he was going to play games for the Wanderers. Throughout the season, the fanbase would also message him words of support when he had a goal or assist, or perhaps a good game. Now that he’s set to call Wanderers Grounds home, he’s keen to give back to the community that has supported him since day one.

Of course, Halifax didn’t just exercise its option on him: the club signed him to a new two-year deal with an option for 2025, investing a good amount of faith in the versatile athlete. It’ll allow him more time to settle in, and he’s excited to repay the club with some good performances in a Halifax kit.

While he can play just about anywhere on the pitch, Patrice Gheisar sees the 22-year-old as a left-back who can push forward on the wing as needed. As a left-footed player, he’s definitely one to watch in that position.

Timoteo is now in the midst of his first full offseason in Canada since his career began. Back home in Montreal, he’s staying sharp with plenty of local athletes who call the city home – it’s a unique player-made training collaboration that sees CPL, PLSQ, and Major League Soccer players all train with one another, offering a high level environment for those hungry to stay sharp during Canada’s long winter.

“I feel the love from every player, I can see the chemistry that it has built between the CPL and MLS players – we hang out, we eat together, we train together, and we push eachother because at the end of the day, we all have the same goal: to be at the highest level as possible. I think that’s the best way to stay fit during the offseason. It’s very competitive and it’s always good vibes, you know the guys and it’s good to catch up at the end of a long season.”

There’ll be plenty of new faces for Timoteo to meet when Halifax’s preseason kicks off, with twelve departures paving the way for a hefty rebuild from new head coach Patrice Gheisar. The club has brought in Canada U-20 forward Tiago Coimbra, with League1 Ontario standout Massimo Ferrin also joining.

With no goalkeepers on the books yet and plenty of roster space still to fill, there’s plenty of new faces yet to be announced who will join Timoteo for the 2023 season – and who will compete with him for a spot on the left flank.