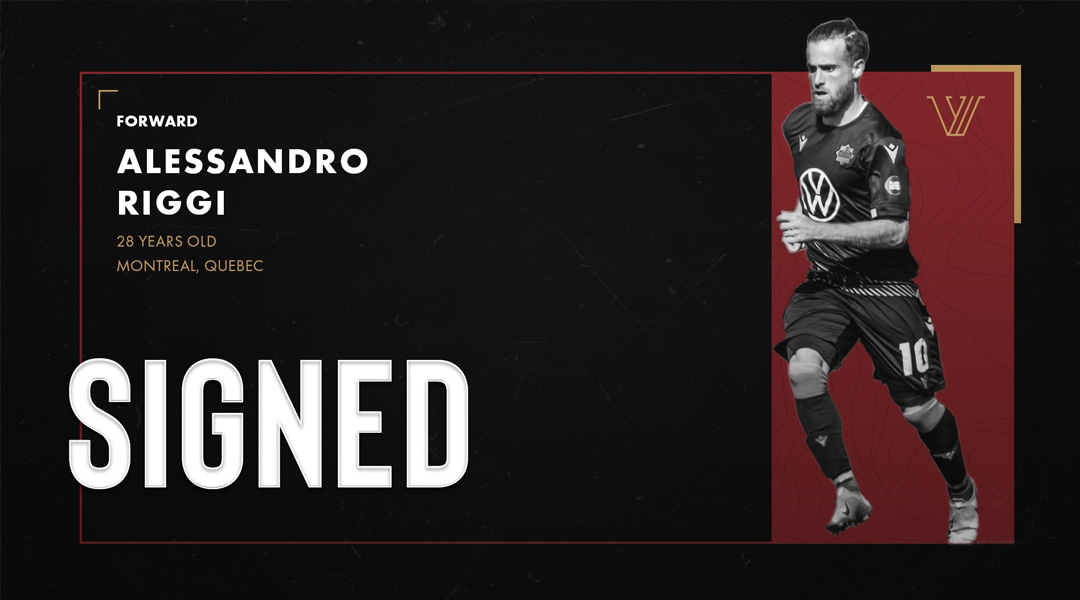 The forward had made 24 appearances for Halifax over the last two seasons, but struggled to find consistent gametime out east after recovering from a knee injury sustained prior to his arrival.

A tricky, fast-footed attacker, the former FC Montreal forward will now embark on a new chapter with a Valour FC side that is keen to establish a hard-pressing mentality under head coach Phillip Dos Santos.

Dos Santos believes that the 28-year-old will blend in well with the group being assembled over at IG Field, with Riggi providing a dynamic option to the club’s attack.

“We always wanted to be able to surround these young signings with players who have experience, but also great character,” says the head coach, “that’s what Alessandro Riggi is: he’s a player I like a lot. He’s dynamic. He’s extremely passionate and feels the game. He’s someone who loves the game, and his passion is contagious.”

The Montreal-born athlete first turned professional with FC Montreal in 2015, departing for Phoenix Rising FC two seasons later. He made 81 appearances in the USL overall, contributing 21 goals and 9 assists before signing with the Halifax Wanderers in December 2019.

Riggi had also made three appearances for Canada at the U-20 level, with Dos Santos already being familiar with the Quebec-born talent.

He’s a good player and someone I’ve known for many years since I was at the National Training Centre in Quebec. I saw him grow as one of the big prospects from the Quebec scene. He played in Europe with youth teams in big championships like Italy and Spain before he came back to Montreal and then Phoenix in the USL and then Halifax.

Riggi will be expected to fit in a front line that commits itself to the attack, though he’ll need to keep his pace in order to help out during defensive segments, too.

The Valour FC attacking line already secured the return of Moses Dyer and William Akio, who scored a combined 17 goals last season. It remains to be seen how Chilean forward Walter Ponce fits into the setup.

He becomes the second former Halifax Wanderers player to land at Valour FC, with Chakib Hocine doing so ahead of The Island Games.

Valour FC did not disclose the length or financial details of Riggi’s contract.