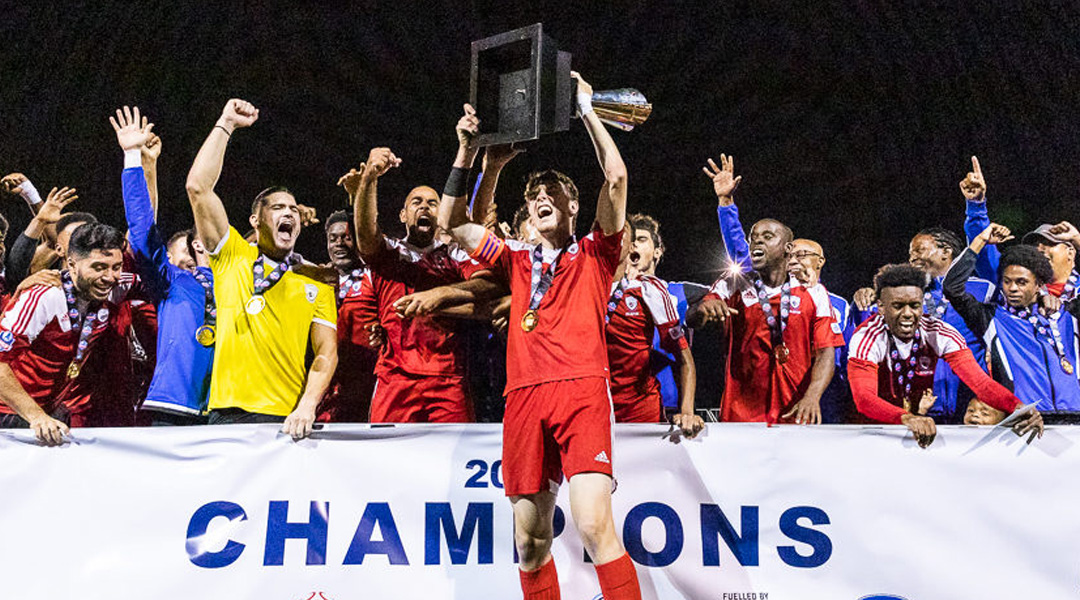 When Master’s Futbol Academy takes on York United this weekend, club owner Junior Groves says fans in the stands will get their money’s worth.

The League1 Ontario side is just three games deep into its season, recording two wins and one loss. It now faces perhaps it’s toughest test yet, a Canadian Championship match against professional side York United. For Master’s Futbol Academy owner Junior Groves, the challenge is nothing but an opportunity for his players to impress.

Still, it’s been a long time since a hat trick from former Jamaica international Akeem Priestley helped the side to its first-ever League1 Ontario title nearly two years ago. The club’s subsequent berth in the Canadian Championship was delayed until now due to COVID-19, so it’d be understandable if many of the athletes who won the league had since moved on from the semi-professional side.

That isn’t the base. In fact, says Groves, the club has retained 100% of its Championship players, with the addition of a few former professionals.

“You will see the championship team,” confirms Groves, “the team that won the finals. You will see that team with professionals added,” he says, also noting that every eligible student-athlete was given permission to play in the Canadian Championship tie by their respective college or university.

Former Ipswich Town midfielder Jaime Peters has joined the team, with the 34-year-old bringing the experience of over 124 European appearances and 26 international caps for Les Rouges. He had disappeared from the professional game as a 25-year-old after trial stints with Toronto FC and the Vancouver Whitecaps, with a former teammate saying he had ‘fallen in with the wrong crowd’ despite loads of talent and athleticism.

As Master’s Futbol Academy has shown in the past, however, the club isn’t concerned with labels. Many of its athletes have overcome them under Groves’ system, and have blossomed outside of it as a result.

We are about people first. If we can build and develop good people, we can develop good players. Good players produce success – it doesn’t matter if it’s on the field or off the field, it’s success. For us, Master’s Futbol Academy’s first priority is the person.

The squad is also bolstered by League1 Ontario veteran Joel Anderson and Grove’s own son, Matthew, who previously played in Malta for Gudja FC and Melita FC. He notes that there are a few additional professionals who may be registered in time, including Allando Matheson, who once featured in the 2010 Canadian Championship for Toronto FC. Former Master’s and TFC midfielder Joey Melo could also return to the team, pending his fitness.

In a match against professional opposition, Groves said he’ll be depending on senior players like Peters, Priestley, and his son to lead by example in what is sure to be a tough, against-the-odds fight.

It won’t all be former professionals and veteran players, though. As Groves puts it, when you add one veteran, you squeeze the life out of one of the youngsters who is coming up. 2019 saw Sheridan Bruins forward Francis Ameyaw contribute nine goals in eighteen appearances for Master’s, so he’ll be one to watch on the night.

Those taking in the game will also want to keep an eye on Terrell Spencer, who scored in the club’s opening match against the North York Nitros. His speed earned him the nickname ‘Bolt’ in college, where he received NCCAA All-America second team honours. Groves states that he’s a phenomenal midfielder who is presently playing at left-back due to the club’s maturity in midfield.

Whoever ultimately gets the starting nod from head coach Rick Titus – who himself is a longtime contributor to Canadian football and a former Trinidad and Tobago international – it appears they won’t mind the underdog label they’ve been handed. “It’s a great position to be in,” says Groves with a laugh, “what do we have to lose?”

He has a point: the club knows that they’re not the favourites, but they’ve overcome those odds before. Groves says that everyone will expect York United to do well, but that Master’s FA will show who they are when the whistle starts the cup match. “I don’t like anything being said about us until the game is finished,” he surmised.

The fact that most of these players have known and played alongside one other for years is an angle where Groves suggests his side has a big advantage over York United, who have undergone a hefty squad rebuild and were thrown into the 2021 Canadian Premier League season with almost no preseason. Groves says having years of togetherness counts for plenty on the pitch.

It’s huge in football. For us, we do have it. We never had to rebuild it. Anybody else that came in was a part of the building program. Jaime was always around us, with us, and in our group chat, and has now joined us. Matthew was always a part of educating our players from Europe, we know where he is, what he’s doing, and telling players what to expect when they’re in Europe. Akeem has been here and is now a permanent resident. We have these players who are a family.

While League1 Ontario has produced several talents that have performed well in the Canadian Premier League, Groves admits that he’s a little bothered that none of his championship team were called on to make that jump.

We were the champions, and none of our players were selected. It showed that we have the caliber to be there, because a lot of other players went from other teams that weren’t champions. Our players are just sitting back and going ‘okay, give me a chance, let me show you!’

That isn’t to say that the team hasn’t helped put a stamp on the Canadian Premier League: the academy had helped athletes like Cyrus Rollocks and Malcolm Shaw along the way, but they weren’t part of the championship squad in 2019. As he puts it, that feeds the current squad a lot of motivation.

Groves is also adamant that he and head coach Titus have put together a team that will give fans their money’s worth at York Lions Stadium. He didn’t shy away from stating that he’s hopeful some curious eyes will be turned into Master’s Futbol Academy fans after watching his players on the pitch.

Coming from a guy who used to bicycle kick balls back to his own goalkeeper, he knows a thing or two about entertaining the crowd, too.

One of the elements that we bring into the game is that we want to entertain every single person who works hard to spend their money and watch us. They will get that level of entertainment when they come into the park. Our players know what it’s like to work hard, and when we see people work hard and come to the game to watch us, we’re going to give them their money’s worth.

Whoever wins the single leg affair will meet Toronto FC in the quarter-finals, which would mark the first time either team would potentially play the Major League Soccer giant. Although Groves has backed his squad, it is expected that York United will have the honour. The team rest fifth in Canadian Premier League standings, and will enjoying a home field advantage.

York Lions Stadium also witnessed York9 FC (now York United) come minutes away from procuring a shock win over eventual winners CF Montreal in the Canadian Championship back in 2019, where the club went undefeated in all of its home cup ties. The odds aren’t exactly stacked in Grove’s favour.

Still, the 2019 League1 Ontario season saw Master’s FA overcome a lot of adversity, with training sessions happening in cricket pitches and football endzones throughout the city, and players training separately. COVID-19 has had an impact on the club, though Groves suggests it was surprisingly minimal.

For us, it was pretty good because we gave all the time to the digital teaching and learning, and video exercises, body hardening, and body touches. Now, I don’t have to do any of that. We’re doing a lot of playing. And watching them develop based on what they’ve learned.

The club now also has an almost six-acre facility in the Scarborough / Pickering area, which features an eleven-vs-eleven grass pitch, a smaller turf field, a turf training pitch, and an indoor facility. While using it means some players are in for a commute, it means no more random cricket pitches throughout the GTA.

While it was clear that the sudden schedule announcement of this year’s Canadian Championship caught some teams off-guard, Groves downplayed the shock: in COVID, he says, anything coming out is a surprise because of the timing crunch, but it must be done to avoid the same Champions League berth timing crunch that Toronto FC and Forge FC suffered earlier this year.

Groves doesn’t shy away from it: to him, every team just needs to put their heads down and get it done.

Life is not ideal either, but you’ve got to face it. In our academy, the word excuse, whether good or bad, it leads to the same destination: failure. If you use it and it’s good: failure, you don’t accomplish the task. If it’s a bad excuse and you use it, you still didn’t complete the task. It doesn’t matter, so just get it done. We’re just about getting it done.

With just a few days until kickoff at York Lions Stadium, Groves promises that fans will witness a team ready to muster whatever energy it takes to win a game, with players who are taught to compete – and thus entertain – for the full ninety.

Fans interested in picking up tickets to the Canadian Championship match between York United and Master’s Futbol Academy can do so here. Win or lose, Grove’s team will then return to league action the following week when it takes on 1812 FC for the first time.