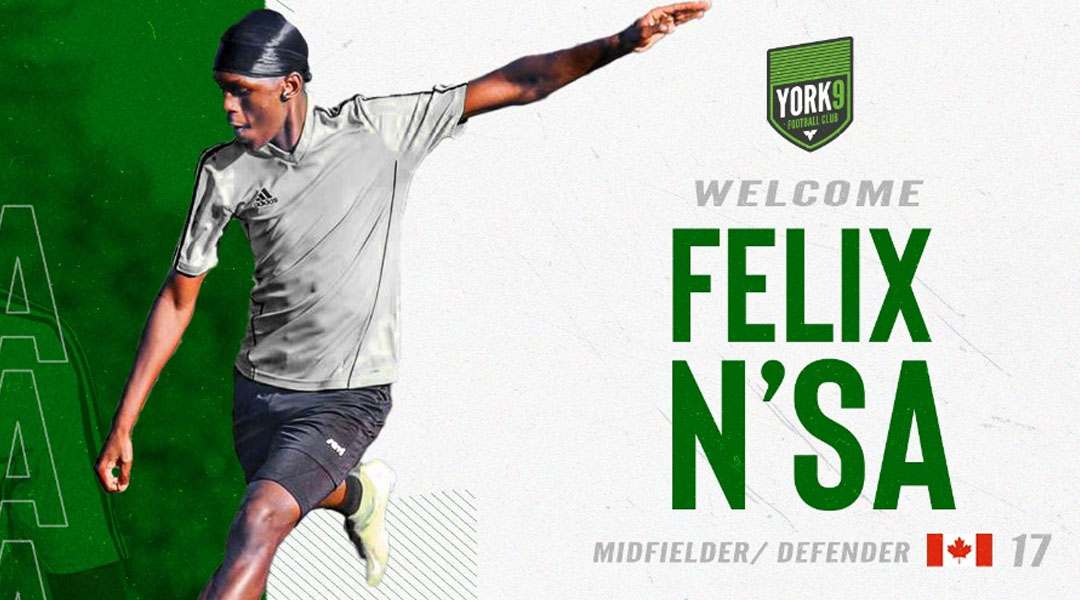 The young Montrealer had had previously trialed with Pacific FC, with Pa-Modou Kah stating that that the club was simply getting a look at a few trialists during the offseason. Evidently, the younger N’sa brother impressed moreso over at the Nine Stripes camp.

Felix is a versatile player capable of playing as both a centre back and defensive midfielder, which makes him a long-term successor to the outbound Matthew Arnone.

Club President Angus McNab says the youngster also has experience as a right-back, revealing that the club has been looking at the youngster since the late summer:

He’s got huge potential and understands he’s going to need to put in the work to earn a job with our squad. His versatility is a huge asset and we’ll work to develop him into the best possible player. He has experience at right-back, centre back and also played as a six, but the best thing about the footage we saw of Felix was that he repeatedly ended up as the standout guy on the park regardless of the position he played.

Of course, many fans are more familiar with his older brother Chrisnovic, who officially announced his departure from the Halifax Wanderers just yesterday after declining a contract offer from the east coast side. It appears he may be destined for York9 FC as well.

The club is in for a defensive restructuring following the retirement of iron man Luca Gasparotto, with centre-back Roger Thompson also having been approached by two other CPL sides amidst his own contract negotiations. McNab has wasted little time bringing in new central options, with Toronto FC Academy product Ryan Lindsay signing to a long-term deal last month.

Felix appears to be a player signed with the future in mind, with McNab stating that he’s hoping time spent under the tutelage of the coaching staff will develop him into a more refined professional athlete:

We’ve got work to do in teaching him the discipline of staying on his feet and not rushing into a tackle but he’ll get the best possible advice from Jimmy and Stally: two legendary Canadian internationals who’ve operated as defenders/midfielders at the highest possible level of the game.

The Nine stripes re-signed full-backs Diyaeddine Abzi and Morey Doner for the upcoming season, with goalkeeper Nathan Ingham returning behind the defensive line as well. The midfield appears destined for a significant shake-up, with multiple players linked to intra-league roster moves.

The club now has six players on the books for next season (and beyond) who all count as domestic U-21 players, suggesting that McNab is placing a large focus on giving young domestic talent opportunities at the professional level.

The financial details of N’sa’s contract were not disclosed by York9 FC.