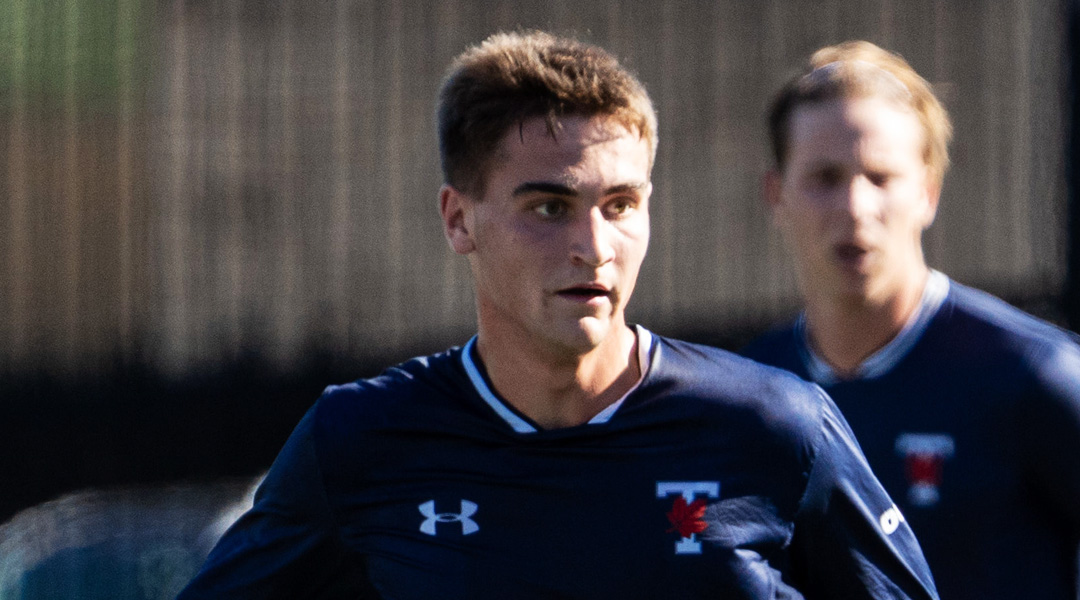 Canadian Premier League expansion side Vancouver FC got the first two picks of the 2023 CPL-U SPORTS Draft, with the club using its first on 19-year-old defender Anthony White. He becomes the league’s youngest-ever first overall pick.

The Varsity Blues defender stands at six-foot-one and has shown good composure on the ball with a good passing eye at both short and long ranges. A rare left-footed centre-back, he’s an intriguing pick from VFC boss Afshin Ghotbi, who believes that he can stand tall in front of goalkeeper Callum Irving.

So, how did a young talent from Port Moody, British Columbia end up on the radar of the CPL’s newest team? It’s been a long path to reach what is, effectively, just the starting point for the 19-year-old.

Born and raised in Port Moody to parents who both played the game, White’s soccer roots began with the hometown club where his father coached, Port Moody SC. Identified as a young talent early on, he changed to a larger side in Coquitlam to compete at a higher level. He then captained the BC Provincial team and, seeking experience abroad, soon ventured to Europe.

The 19-year-old talent holds a Croatian passport through his mother’s heritage, which opened some key doors for him. He was able to train with Croatian powerhouse Dinamo Zagreb for two separate spells, had a training stint in Germany with FC Nurnberg, and in 2019 he trained with NK Sibenik, another top flight Croatian side located in Dalmatia.

For White, the opportunity to be coached in such a high level environment was invaluable, and helped shape his game immensely.

“Amazing coaches, an amazing experience,” he reflects, noting that while the facilities in Croatia weren’t the best, the clubs themselves were able to develop and bring in talent on par with the likes of Real Madrid. With Mislav Orsic scoring a bronze-medal winner in Qatar today, it’s a timely shout.

That Real Madrid comparison didn’t come out of the blue for White, with the 19-year-old having been selected as one of sixteen Generation Adidas players to train in Spain with Real Madrid and the Spanish National Training Centre back in 2019. It provided more memorable training sessions for the defender, who describes the opportunity as a once in a lifetime experience. He featured against Real Sociedad and Rayo Vallecano, following which he played against a team from Japan and two from the United States before returning home.

“With the facilities in Croatia I just kind of realized that I could have so much potential because facilities in, for example, the University of Toronto are much better than that. It’s really what you make of it all, and the work you put in. I came out of Europe with that mentality, it lit a fire and that helped me get to where I am now.”

The two seasons leading up to this draft were big ones for White, who had to enlist with the Toronto Varsity Blues during the COVID-19 pandemic. That meant head coach Ilya Orlov only had video to go off of, with a recommendation from Whitecaps Residency coach Ryan Clark helping secure a 2021 U SPORTS roster spot for the rookie defender.

“You can’t really tell a player from just video, so for the first three games I think I might have played in the last five minutes of the games. Then I got a starting opportunity, and I got thrown in as a left-sided centre-back. I did really well, and from then on I just became a starter at university. It’s a really good place to develop, especially as one of the first or second year players. You’re playing against older athletes who are physically stronger, and it really changes your game.”

That growth led the defender into a white-hot 2022 season that saw him recruited by the TSS Rovers for the inaugural League1 BC season. Paired at the back with his older brother Nikolas, the duo locked down the defensive end of the pitch and played a big role in helping the Rovers secure the league’s first-ever men’s championship.

He describes League1 BC as having been a similar environment to university, where there’s older players that make it a good place for young talent to develop physically and technically. He also placed a lot of credit in his growth here to Will Cromack, who was a big source of encouragement and coached the community-owned team to the title win.

“In the final I was the youngest player on the field, which says something about me – but also, the league has lots of experienced players and good quality players at the same time.”

With his profile boosted by the championship win, White returned to the Varsity Blues for his second university season, where he balanced his kinesiology studies with eleven appearances before heading into the CPL-U SPORTS Draft. When he self-declared for it, he had hopes that his strong 2022 season might put him on radars, but he kept his expectations tampered.

Then he got a call from Afshin Ghotbi and his coaching staff a week prior to the draft, and those conversations evidently went well. Oliver Gage had poured over his videos and numbers, and the team was interested. The pieces were quickly falling into place, and one week later Vancouver FC selected White as the first overall pick. He’s ready ready to make the best of his the trial opportunity.

“From our conversations it sounds like it’s a really professional environment, and the experience with them will be amazing. My plan is to go there and be very coachable, and just have my ears wide open and take in whatever they have to say. In the worst case scenario if I don’t make the team, I’ll walk away a better player by listening to what they have to say.”

Anthony is taking a path similar to two high-profile Canadian defenders who rose through professional ranks quickly: Joel Waterman, who was a draft selection that had played for the TSS Rovers, and later became the first former CPL athlete to crack a World Cup roster. There’s also Toronto FC’s Lukas MacNaughton, who had also been coached by Ilya Orlov at the University of Toronto before solidifying himself as a top CPL defender out west and securing his own MLS move.

“It’s definitely something I take inspiration from. It makes me realize the opportunity is there, and it’s something achievable. It gives me even more motivation to go after it,” says White, who dreams of representing the Canadian national team one day.

“A big part of that dream will stem from my experience in the CPL under this coaching staff. I’m taking in what they have to say, I’m using this as best I can to develop from the CPL to potentially Europe or MLS.”

The left-footed centre-back is clearly keen to turn his preseason trial with Vancouver FC into a professional opportunity. With preseason camp set to start in February, his opportunity is fast approaching.